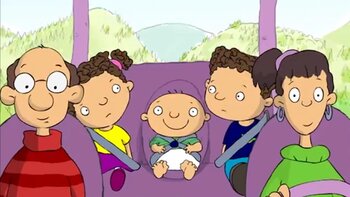 BB3B was a British TV series first released in 2005. It was produced by Tell-Tale Productions and ran for a single series of 13 episodes.

The plot of the show centers on twin children, Lucy and Louie, who have gotten a new baby brother. However, they believe that their new baby brother, Billy Bob Third Baby, is a mind-controlling alien who wants to enslave the world. Each episode involves an event where they suspect Billy Bob of being an alien, which leads to them going on a wild adventure.