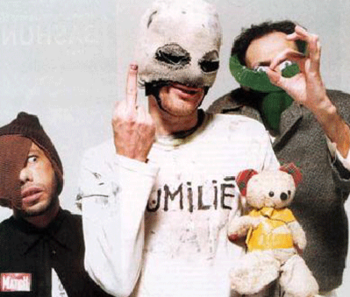 Stupeflip is a French Alternative Hip Hop trio which is arguably led by Julien Barthélémy who handles most of the songwriting and production.

Standing out as an non-conforming band, Stupeflip started their career by doing an anti-commercial promotion despite being signed to a label owned by BMG. The promotion of their first album went noticed for the band members' hectic attitude on radio and TV sets (to the point that people thought they were industry plants) as well as insulting their fans during concerts. Following the release of their second album (which can be perceived as a criticism of the record industry by the trio), they got dropped off by their label. In 2011, the band came back with their third album The Hypnoflip Invasion to great success. Six years later, the band launched a crowdfunding campaign for their fourth album which also went successful.

Stupeflip also has its own lore and describing it isn't an easy task. The trio's name Stupeflip refers to two main characters, Stup (also named Cadillac) and Flip (also named King Ju), but there are other characters such as Pop-Hip, MC Salò, Reverb Man and much more (some characters also bear multiple names). All those characters form a group called "Le Crou" (the crew). Stupeflip also has its own chronology and geography, but information about those are extremely scarce (and some of them also contradict each other) and Julien Barthémély prefers to keep a little bit of mystery behind it. Stupeflip as a whole is best described with those words by their first spokesperson Fabien Polet: "The Stupeflip crou is here, among other things, to terrorize the population and by the same occasion install a new era: the Stup era.".

Outside of its abstract lore, Stupeflip has its own fans (nicknamed "The rabbits") which has its own fanbase called the A.S.F.H. (Association des stup fanatiquesnote Association of fanatic stups (the H is up to interpretation)). "Rabbits" contribute different interpretations of the Crou and its meaning, something which Julien Barthélémy has approved, stating that the free interpretation of Stupeflip works the same way as not following orders and making your own opinion.