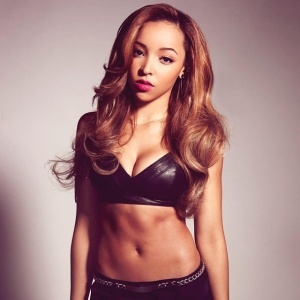 Tinashe Jorgenson Kachingwe (born February 6, 1993), known mononymously as Tinashe, is an American singer-songwriter, multi-instrumentalist, dancer, actress, director, and former model. She began her entertainment career at the age of 3 when she began modeling and acting. In 2012, Tinashe released two critically acclaimed mixtapes, In Case We Die and Reverie, which she created in her home studio. After the release of the mixtapes, Tinashe signed with RCA Records. She released her third mixtape, Black Water, on November 26, 2013, and her debut solo album Aquarius, on October 7, 2014. Her debut single, "2 On", was released in January 2014. The song stayed at number 1 on the Rhythmic Top 40 for over 4 consecutive weeks, and peaked at number 24 on the US Billboard Hot 100 chart, becoming her first Top 40 hit single.

Tinashe made her acting debut in the television film Cora Unashamed in 2000. In 2004, Tinashe appeared in box-office hit The Polar Express alongside actor Tom Hanks, providing the motion capture for the female protagonist. From 2008 to 2009, Tinashe had a recurring role in American sitcom Two and a Half Men as Celeste, Jake's girlfriend.