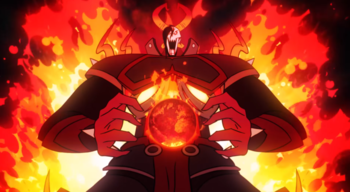 "Udoroth, the demon lord! / Laying waste to man's dominion with his horde! / A reign of fear and carnage that shall be restored!"
"I steal your sanity, betray your heart and let it bleed./ Burn down your paradise and drain your love./ I stain your purity, become thy faithful enemy./ Defile your womanhood before his eyes."
—Griffith/Femto, "The Fifth Angel"
Advertisement:

Put on some headphones and listen to these tales of utterly heinous villains.

For acts with multiple entries, the entries are sorted by release date.