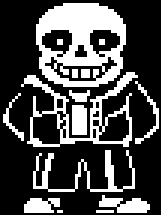 "i've gotten a ton of work done today. a skele-ton."
"maybe it's a little strange, but sometimes... it's nice to have someone call you out on being lazy. even though nothing could be further from the truth."
Advertisement:

A lazy skeleton who hates work and loves puns. He pops up here and there, usually touting some sketchy money-making scheme or offering to take you out for lunch. He also thinks the world of his brother, Papyrus.

NOTE: As a main character (and a Walking Spoiler), this page has the potential to give away major spoilers. Proceed with caution if you have not finished the game. You wouldn't want to have a bad time, now would you?