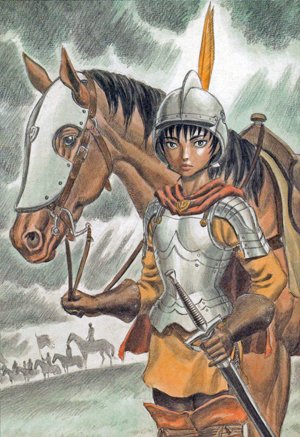 "Everyone is weak. That's why we cling to one another, to our dreams."
Click here 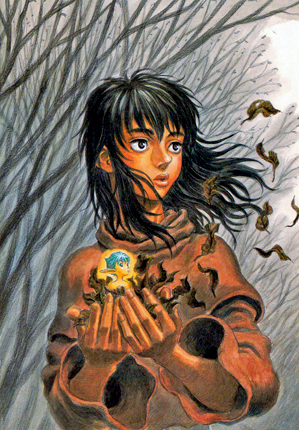 to see Casca's appearance after the Eclipse.
Click here 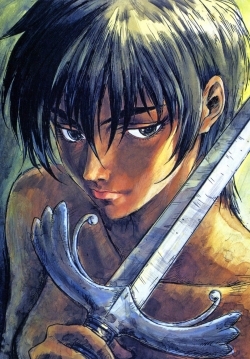 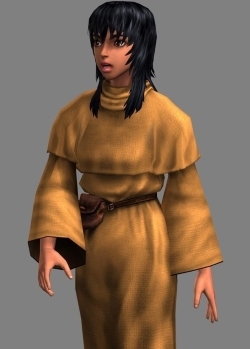 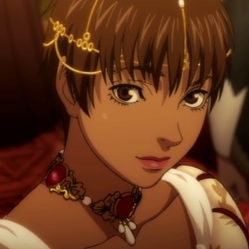 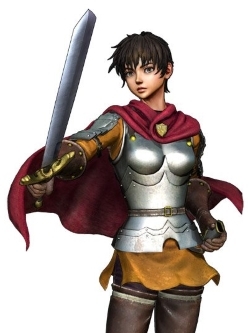 to see Casca in Berserk and the Band of the Hawk.
Advertisement:
"I think that someone who wants to accomplish something grand endures that much more than other people [...] If he's going to sacrifice everything for his dream, if his dream is to fight and cut away his own path, then I want to be his sword."

The female lead of the story and one third of the three protagonists, that also includes Guts and Griffith, Casca first appears as a dark-skinned, tomboyish, and extremely capable Action Girl in charge of a large number of troops. Born into a poor peasant family with too many mouths to feed, she became Griffith's most devoted follower after he saved her from Attempted Rape at the age of twelve by throwing her his sword to defend herself with. For being a Consummate Professional as a leader and second only to Griffith at swordsmanship before the arrival of Guts, she is highly respected by her fellows among the Hawks and affectionately called "Big Sis."

At first Casca despises Guts and opposes his acceptance into the Band of the Hawk. She stops Corkus' attempt to murder him in his sleep, but claims that she's just following Griffith's orders and hopes he'll get himself killed in battle. Jealous that Griffith shows an immediate affection and trust toward Guts that he has never shown to anyone before—not even to her—she resents his rapid rise and claims that Guts' recklessness on the battlefield puts Griffith and all of the Hawks in danger. After three years of fighting with each other like cats and dogs, Guts and Casca finally develop respect for each other through an adventure that forces them to cooperate to survive, and from that point onward mutual attraction starts to grow between them despite her longstanding infatuation towards Griffith. As she comes to recognize the nature of her feelings toward Guts and the bond between the two men turns adversarial over Guts' intention to leave the Hawks, the relationship between the three of them grows very complicated.

Casca takes temporary command of the Hawks during Griffith's imprisonment by the King of Midland, and when Guts returns after a year's absence they officially become lovers. While they succeed in freeing Griffith, his crippled body means the Band of the Hawk is forced to disband. Faced with the prospect of having only Casca's pity and of losing Guts a second time, Griffith's despair activates the Crimson Behelit and sucks them all into the demonic feast known as the Eclipse. Casca and the rest of the Hawks are branded as sacrifices, and after her comrades have been eaten she is brutally raped by Griffith in his first act as the God Hand's fifth member, Femto. Although she and Guts survive due to the intervention of the Skull Knight, she becomes insane and mute after her horrific ordeal and behaves like a small child, with no recollection of her surroundings or her past with Guts. She also gives birth to a Fetus Terrible, the son she and Guts would have had were it not tainted by Femto's rape, which vanishes with the daylight but subsequently reappears throughout the story. Despite all that happened to her, she still sometimes shows glimpses of her former self, especially when put in mortal danger.

After the Eclipse, she is left in the care of fellow survivor Rickert at the home of the blacksmith Godo while Guts departs on a Roaring Rampage of Revenge against all Apostles and the God Hand. Returning to Godo's home two years later to find that Casca has wandered off and fallen into danger, Guts saves her from being burned as a witch during the mock Eclipse at the Tower of Punishment and vows to never leave her again. However, the strain of taking care of and protecting her by himself turns out to be too much for him, and the urging of the malevolent Beast of Darkness that grew inside him during his two year rampage leads him to nearly rape her. Fearing what he might do to her if he loses control again and recognizing that he has reached his limit, he decides to accept the help of a new group of companions to accompany them on their journey to Elfhelm, where the Flower Storm Monarch may have the power to restore Casca's mind. Farnese takes on the role of Casca's caretaker, and Casca herself becomes attached to a mysterious child who shows himself only on nights when the moon is full.