Due to these character being Walking Spoilers, all spoilers here are unmarked. You Have Been Warned.

This creepy, kooky, mysterious, and altogether spooky family serves a big role in the backstory to the games, especially their father, William Afton. The Child from 4 may or may not be part of the family; however, since we're not truly sure, he's not included in this list.
William Afton

I will make you proud, daddy.
"Daddy, why won't you let me play with her?"
Voiced by: Zehra Jane Naqvi
The daughter of the serial killer, William Afton. She is heard at the beginning at every night in Sister Location, begging her father to let her play with Circus Baby. She eventually sneaks off to do it without her father's permission... and gets herself murdered for her trouble.

Freddy Fazbear's Pizzeria Simulator (Five Nights at Freddy's 6 by any other name) confirms that her name is Elizabeth. 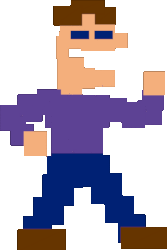 ...but I'm not.
"Father. It's me, Michael."
Voiced by: PJ Heywood
That is to say, William Afton's son. He was tasked by his father to find "her" (presumably his sister) and "put her back together". He succeeded, but died along the way... kind of.