Due to this character being a Walking Spoiler, all spoilers here are unmarked. You Have Been Warned.

Voiced by: PJ Heywood
Otherwise known within the fandom as the Purple Guy (after his initial appearance in FNaF 2), William Afton is the definitive Big Bad of the entire Five Nights at Freddy's franchise. He is an amoral Serial Killer who targets children for nebulous reasons which only become hinted at over the course of the series. While he only rarely makes a physical appearance in-game, his influence can be felt in the various death minigames that pepper the games, and he takes center-stage in the third, sixth and eighth games. The unique differences between his incarnations can be found below.

If you're curious to hear from his perspective, go here... just make sure you get out alive. 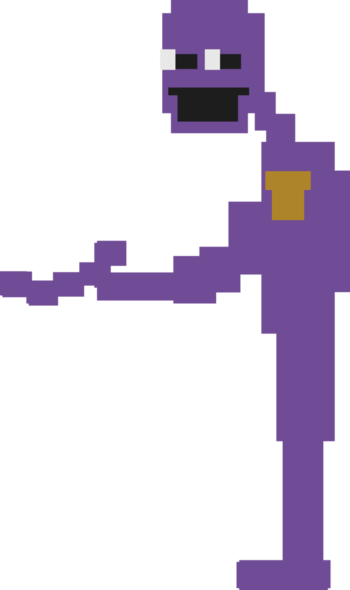 "I always come back!"

"As if what he had already done wasn't enough, he found a new way to desecrate, to humiliate, to destroy. As if the suffering wasn't enough, the loss of innocence, the loss of everything to so many people."
— Henry Emily / The Cassette Man
William Afton is the old business partner of Henry Emily, helping him in opening up both Fredbear's Family Diner and Freddy Fazbear's Pizza, while also owning his own company, Afton Robotics. For reasons currently unknown, Afton was a Serial Killer targeting children, and if not for him, the events of the franchise couldn't have possibly happen. Through ups and downs, one thing remains certain: He will come back.
Springtrap

"It is not your flesh that sustains me. It is your fear!"

"We found one. A real one. Uh-oh-uh gotta go man- uh, well-well look, i-it's in there somewhere, I'm-I'm sure you'll see it.."
— Phone Dude
Thirty years after Freddy Fazbear's Pizza closed its doors for good, a place called "Fazbear's Fright" was built, a horror attraction meant for patrons to relive the horrors of the cursed pizzeria. However, the attraction now has one new animatronic… this guy. Springtrap is a failed attempt to create a multi-purpose suit with animatronic parts that could lock away with springs, so it could be worn as a costume by employees. Unfortunately, the spring locks didn't hold well, and so the suit was left to rot...
Scraptrap

"You may not recognize me at first, but I assure you, it's still me."

"Although for one of you, the darkest pit of Hell has opened to swallow you whole, so don't keep the Devil waiting, old friend."
— Henry Emily / The Cassette Man
After the fire at Fazbear's Fright completely demolished the location, Springtrap has managed to escape and was set loose. However, when he receives a call from a strange someone about a new pizzeria, Afton instantly recognizes it as a trap. However, his cockiness, sadism and temporary grabbing of the Villain Ball lead him to go there anyway.
Advertisement:
Glitchtrap 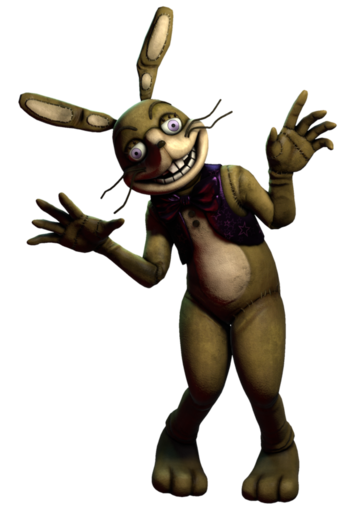 "It wants to escape. To escape through someone. Someone plugged into this game. That's you now."
— Tape Girl
Not even having his body destroyed beyond repair stopped Afton. Once the employees at Fazbear Entertainment and Silver Parasol Games start scanning circuit boards to make The Freddy Fazbear Virtual Experience, one of the employees gets Afton's circuit board, letting the man abandon his physical body and return as this virus. One problem remains, though: He's trapped. However, it doesn't take him long to realise you might be useful in his escape...
Burntrap

"He is trying to take control of me... I do not think I can fight it for long."
— Glamrock Freddy
Deep under the Mega PizzaPlex lie the remains of Freddy Fazbear's Pizza Place, burned down and damaged thanks to Henry's fire. However, inside the labyrinth that Henry built to keep the animatronics inside, lies a recharge station... and guess who's inside it? Burntrap is William's latest incarnation, an even more withered version of the already-bad looking Scraptrap suit, now with additional fire damage thanks to Henry. How Glitchtrap found a way back inside his body is unknown. What is known is that he wants to claim more victims, and Gregory is his latest one...

"The Devil has knocked on my door before, and I turned him away."
Click here to see Springtrap 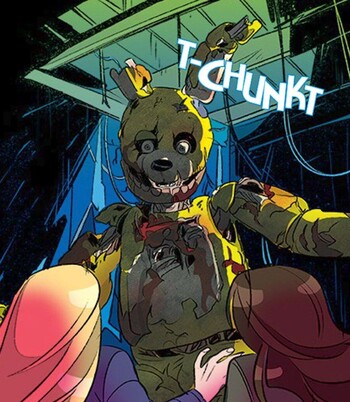 Click here to see him in The Fourth Closet 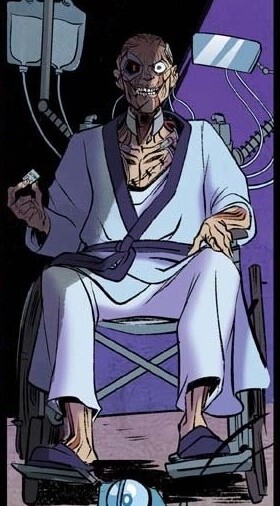 "Everyone is afraid to die. And you should be more afraid than anyone else, because if there's a Hell, there's a hole at the bottom of it reserved for you."
— Jessica
The novel version of the Purple Guy. One of two founders of Fazbear Entertainment alongside Henry Emily, Afton eventually used their business as an opportunity to murder children, which resulted in them possessing the animatronics.
Adventure Springtrap 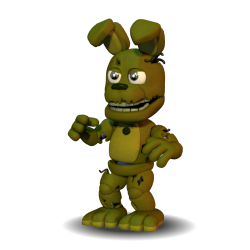 "Cuter in person; still a killer." 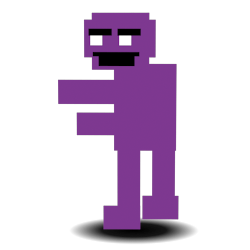 "Don't confuse me with the actual Purple Guy. I'm just a game sprite."
— Purpleguy
Afton in the RPG spin-off. Not actually the infamous murderer himself, but rather a sprite of him.
The Man in Room 1280

"It felt like [Jake] was being mauled and pummeled by a force filled with a never-ending need to inflict pain."
— Narrator
A heavily burned man who has been lying in a hospital bed for years, seemingly unable to die despite his body being far past the point of death.
"I am still here."