Five Nights at Freddy's Main Character Index
Character-specific pages: William Afton
Animatronics: In general | Games: First Generation, Second Generation, Third Generation, Fourth Generation, Fifth Generation, Sixth Generation, VR Generation, Seventh Generation, Adventure Characters | Novels: Silver Eyes Continuity, Fright Generation
Humans: Protagonists, Instructors, The Afton Family, Other Humans
Miscellaneous: Companies
Advertisement:
The player characters for most of the games.
open/close all folders
In general
Most of the protagonists are just some schmucks that wanted to make some minimum wage. Unfortunately for them, they chose the wrong place to night watch. With only the tools at hand, some nerves of steel, and a strange persistent to come back every night, these night guards have to survive five nights at minimum to get their paycheck. Since The Child and Charlotte are so different from the night-guards, they aren't included in this folder.
Mike Schmidt

"Hey you're doing great! Most people don't last this long. —I mean, y'know, they usually move on to other things by now. I'm not implying that they died."
— Phone Guy

The protagonist of the first game. A Heroic Mime, like many video game characters, he's the latest security guard to take the (literal) graveyard shift (12 A.M. - 6 A.M.) at Freddy Fazbear's Pizza, "a magical place for kids and grownups alike, where fantasy and fun come to life (at the cost of his)". His job is simple: Sit in the security office and watch over the expensive free-roaming animatronics in the Show Stage area for six hours. At least it was simple, up until the animatronics started trying to kill him. The things they leave out of the orientation packet...

"The last guy finished his week, but complained about... conditions. We switched him over the day shift, so, hey: lucky you, right?"
— Phone Guy

The Featureless Protagonist of the second game, who takes the night watch position at the new and improved Freddy Fazbear's Pizza. A Heroic Mime, like many video game characters (and the Player Character before him). Most tropes that applied to his predecessor also apply here.

A Heroic Mime just like his fellow night guards, Fritz is the protagonist of the prequel's Custom Night.
Advertisement:
Fazbear's Fright Guard

The unnamed protagonist of Five Nights at Freddy's 3, who is tasked with testing out the attraction the week before it opens. Pity that he's trapped alone with an abomination like Springtrap. May or may not be one of the previous guards.
The Child

A child should not have to go through this...

The unnamed protagonist of the Five Nights At Freddy's 4 minigames, who unlike the others is not a security guard, and isn't even an adult. Assuming that he is the protagonist of the nights, his house is being haunted by the Nightmare Animatronics and he's armed with nothing but a flashlight and simple wooden doors. Sister Location heavily implies, if not outright confirms he's an Afton.

For information about the character, please visit the Michael Afton folder on the Afton Family page.
The Beta Tester (Major spoilers unmarked) 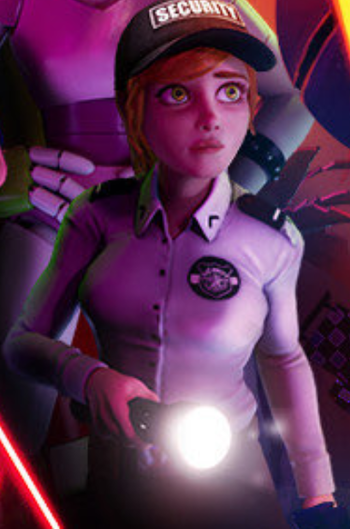 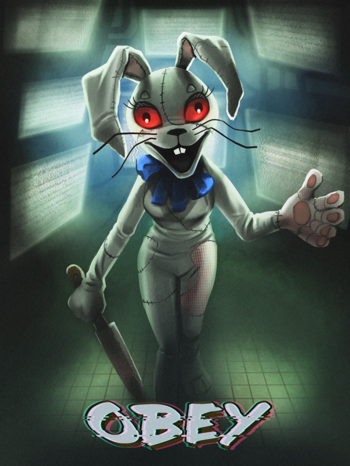 "Yes, I hear you. I know... No. There's no miscommunication... I understand... Yes, I have it. I made it myself. I think you would like it... No, no one suspects anything... Don't worry, I'll be ready, and I won't let you down. It will be fun."
Voiced by: Jessica Tang (Help Wanted), Stacey Young (first Security Breach trailer, Nvidia showcase), Heather Masters (Security Breach), Marta Svetek (Vanny, Security Breach)

The protagonist of Help Wanted. A beta tester for Fazbear Entertainment's Five Nights at Freddy's VR game who finds herself in more danger in the virtual world than the company let on. She returns in Security Breach as Head of Security for Fazbear Entertainment's PizzaPlex... and as Vanny, a mysterious rabbit-suit wearing entity who's out to recreate a specific Fazbear experience under the guidance of Glitchtrap.

The protagonist of Security Breach, Gregory is a young boy who happens to be in the Pizzaplex after hours. Usually, this would be a dream come true for most children. Unfortunately, he's not there willingly, but instead trapped inside the building after it closed for maintenance. It doesn't help that there happens to be a certain someone and her hacked animatronics out to find him...