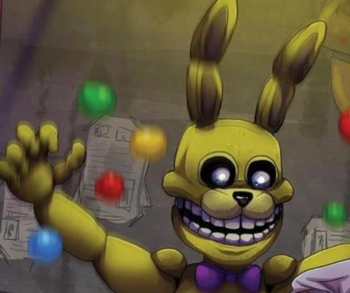 "What is that creepy thing?"
The villain of "Into the Pit". A mysterious golden rabbit-suited… thing which appeared in the Freddy's location visited by Oswald in 1985; it then followed him back to the present and attempted to take over the life of Oswald's father, with a disturbing degree of success.
Funtime Freddy 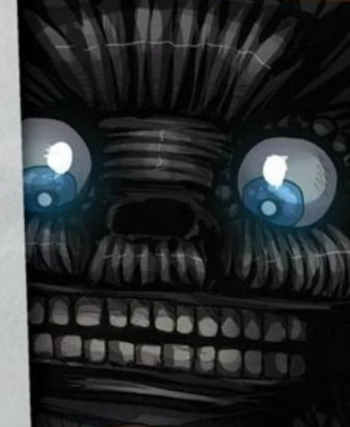 "Lamb chop, there's nothing I want from you except your life."
The villain of "Count the Ways". A withered and decayed animatronic bear found in Millie's grandfather's shed; upon crawling inside, she discovers that the bear is in fact still active… and quite insistent that she choose one of several means of execution at his hands.
Advertisement:
Fetch 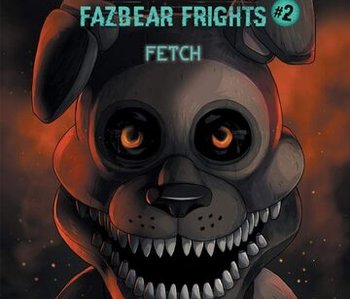 "CU"
The titular villain of "Fetch". An old toy found in an abandoned Freddy's that takes orders a bit too literally. It was the toy containing Andrew's soul.
Lonely Freddies 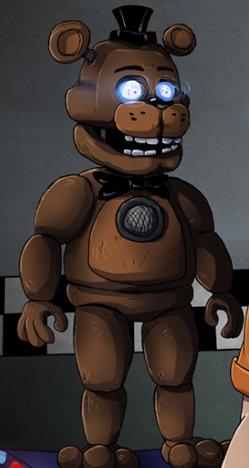 "What is your biggest regret... Alec?"
The villains of "Lonely Freddy". Local toys at Freddy's that are given to lonely kids.
Plushtrap Chaser

The villain of "Out of Stock". A toy sold by Fazbear Entertainment that deactivates if exposed to light. It was sold out, but the heroes manage to steal a really cursed one. After being destroyed, its remains are collected by the Stitchwraith.
Ella 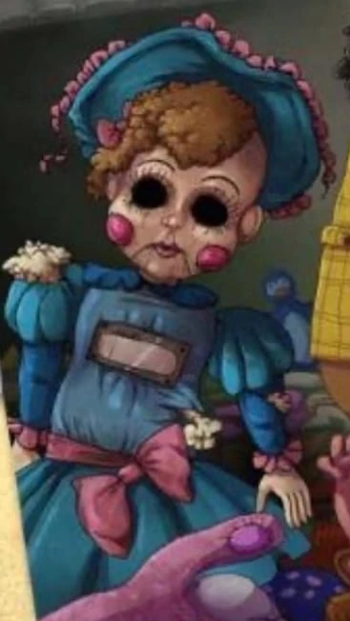 "It's time."
The villain of "1:35 AM". A toy found by Delilah that really enjoys tormenting her. Later collected by the Stitchwraith.
Minireenas 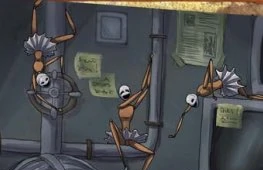 The villains of "Room for One More". Some of the many mascots at Circus Baby's Entertainment & Rental.
Advertisement:
Foxy the Pirate 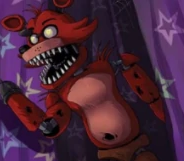 "You can be a pirate, but first you'll have to lose an eye and an arm!"
The villain of "Step Closer". A deactivated animatronic sitting in the backstage of Freddy Fazbear's Pizza. Later dismantled and collected by the Stitchwraith.
Ballora
The villain of "Dance with Me". She can be seen through glasses that Kasey stole, and she's really pissed at her for it.
Chica the Chicken

The villain of "Coming Home". Forces Susie's ghost to go back to Freddy Fazbear's Pizza each time she comes back to her house.
Ralpho 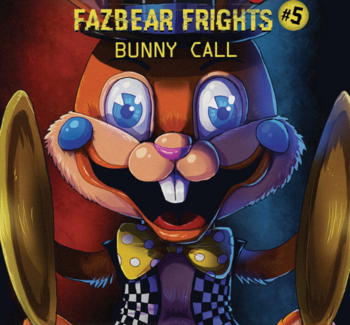 "When you sign up for a Bunny Call, the rabbit over there - his name is Ralpho - will visit your cabin."
The villain of "Bunny Call". The mascot of the titular service that comes to the guest's cabinets and wakes them up by making loud noises.
VR Springtrap 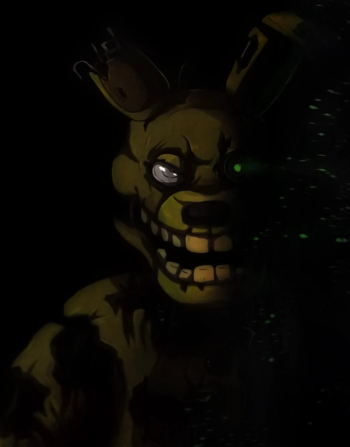 The villain of "In the Flesh". A video-game character serving as the titular Big Bad of Five Nights at Freddy's: Springtrap's Revenge.
The Blackbird 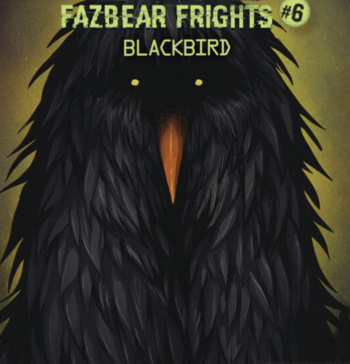 "The Blackbird will make you tell."
The titular villain of "Blackbird". A fictional character made by Nole and Sam for their filmography, inspired by Freddy's and The Raven.
RWQFSFASXC/Shadow Bonnie
The villain of "Hide and Seek". A video game character and a shadow that attaches himself to Toby's own shadow, fueled by his anger.
Tag-Along Freddy 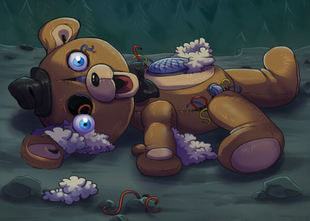 "Why don't you go to the Cliffs?"
A toy Freddy Fazbear (no, not that one) that monitors children (not that one either) and sends updates to a parent via a watch.
Lucky Boy 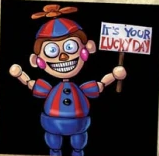 A talking figurine of Balloon Boy, he is found in trash by the roadside by Sergio, who uses him as a sort of fortune teller to tell him what to do. Although his suggestions initially seem harmless and bring good luck, they become more sinister...
Springtrap
A decaying rabbit animatronic recovered from a derelict Freddy Fazbear's Pizza and brought to Fazbear's Fright, it contains a source of incredible darkness.
Friendly Face 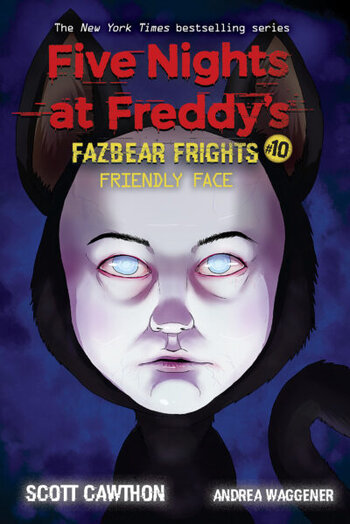 Meant to be a recreation of Faraday, Edward and Jack's adopted cat who died along with Jack after getting hit by a truck, it turned out as a Mechanical Animalistic Abomination after Edward mistakenly submitted Jack's hairs as genetic material to create the face.
Sea Bonnies
Sea monkey-like creatures distributed at Freddy Fazbear's Pizza that are blue with beady black eyes and have long appendages resembling rabbit ears. They infest and take the form of any living creature they can access.
Rosie Porkchop
A female pig animatronic with a springlock endoskeleton was donated to a high school robotics class.
Lally 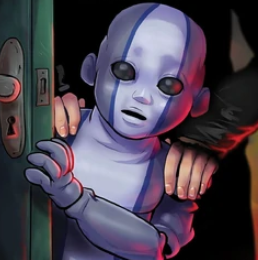 "The game is only for two."
A small animatronic vaguely resembling a child with a white outer shell. He was part of an attraction at a Pizzaplex called "Lally's Game" meant for lonely kids who would play hide and seek with him. After a construction accident broke open the outside wall of "Lally's Game", Lally disappeared and went on to haunt Cade, a kid who spent a lot of time with Lally and became possessive of him.

General Tropes
"To Be Beautiful" Villain 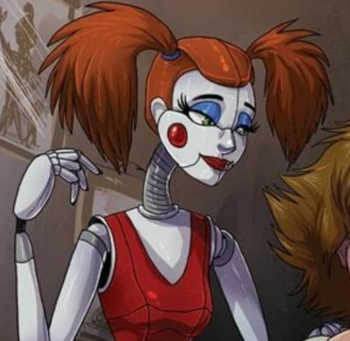 "I made your wish come true, Sarah."
A mysterious human-sized doll who was found in a junkyard, deactivated in the trunk of a wrecked car; upon being rescued by Sarah, she gives the girl a supposedly magic necklace which she says will grant Sarah's wish to become beautiful.
"The New Kid" Villain 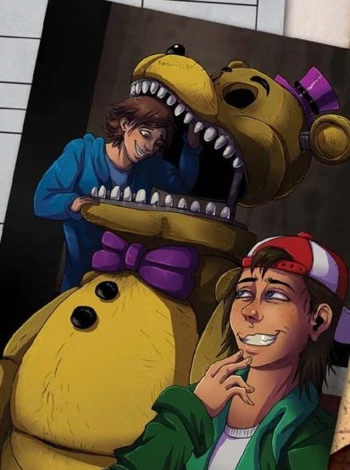 A golden bear hidden in a closet inside Freddy's.
The Man in Room 1280

A heavily burned man who has been lying in a hospital bed for years, seemingly unable to die despite his body being far past the point of death. See here for more information.

The Stitchwraith
An animatronic suit walking the streets that has claimed several victims already. Possessed by two children named Jake and Andrew, and as it's revealed later, William.Tropes that apply to both Jake and Andrew:

Tropes that apply to Jake:

Tropes that apply to Andrew:

The Thing in the Bag

Or rather, her mask (and possibly some other parts). One way or another, something Larson found linked to a fire from Freddy's.