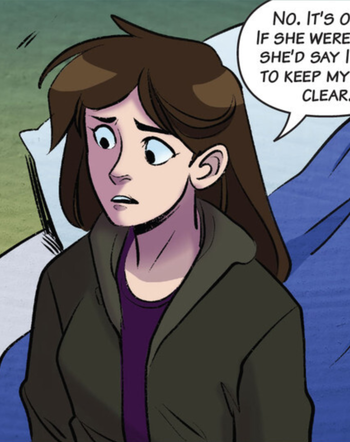 The protagonist of the novels. Charlotte, also known by her nickname Charlie, is the daughter of the man who owned Freddy's and built the animatronics. Ten years after the murders, she and her friends decide to investigate the now-closed pizzeria after being unable to clear their minds of the horrors that went down there. See The Puppet for more info on her games continuity self.

The father of Charlie and Sammy, and one of the co-owners of Freddy Fazbear's Pizza and Fredbear's Family Diner in Five Nights at Freddy's: The Silver Eyes, the novel adaptation.
Advertisement:
Dave Miller/William Afton

The novel version of the Purple Guy himself. See his personal page for more information.

Animatronics that only exist in the book series, they are actually otherwise normal animatronics... with the exception of a device that's been implanted in them. When activated, this device releases a sound that is (usually) too high-pitched for the conscious mind to perceive; this sound messes with the audience's brains, making them fully see the robot as what they believe them to be. So to a normal person, Freddy the robot bear would simply be Freddy the anthropomorphic bear. However, to anyone that's afraid of these robots, they instead become the stuff of nightmares.
Advertisement:

The novel versions of Circus Baby and William Afton's daughter, who have also merged into one entity.