"So remember, these characters hold a special place in the hearts of children and we need to show them a little respect, right? Okay."
— Phone Guy 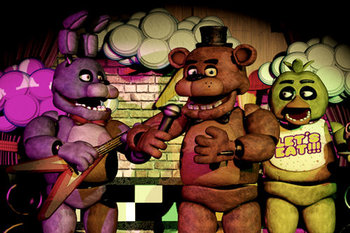 Click here to view official art of the mascots themselves. 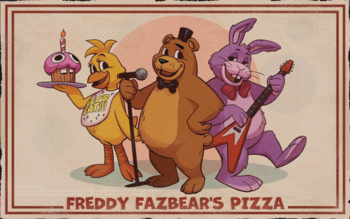 A group of animatronicsnote actually robots, since there is a difference that work in a Suck E. Cheese's pizza joint known as Freddy Fazbear's Pizza. Formerly allowed to walk around at daytime, they are now restricted to roaming only at night as the result of the infamous Bite of '87. According to Phone Guy, they are programmed to ensure that their mascot costumes remain on at all times. This includes taking action if they encounter a bare endoskeleton. Unfortunately, they happen to think you're one such endoskeleton. Also unfortunate is that the inside of those suits aren't exactly made to fit a human inside...

The second game reveals that these mecha-monsters are actually redesigns of the animatronics from the original Freddy Fazbear's Pizza.

After it was hinted at multiple times in the previous games, the third game confirms that the reason they kill people is actually because they are possessed by the souls of the children mentioned in a newspaper in the first game. As their killer was a security guard, it only makes sense they'd mistake you for him.

SAVETHEM
"Uh... Interestingly enough, Freddy himself doesn't come off stage very often. I heard he becomes a lot more active in the dark though, so, hey, I guess that's one more reason not to run out of power, right?"
— Phone Guy
"♪My name is Freddy, I'm the singer in the band / Got a hat and a big bowtie / I'm a big round bear, but don't be scared / I'm a real fun-lovin' guy!♪"
Voiced by: Kellen Goff (in Freddy and Friends on Tour animated shorts and Dummied Out lines as Classic Freddy in Help Wanted), Tim Simmons (in Special Delivery), Yoon Ho (in Ultimate Custom Night anime cutscenes)

What happens when Yogi Bear goes nuts? You get a big brown animatronic bear wearing a black top hat and bow tie, who is the mascot of Fazbear Entertainment® and the central character of the animatronic show in the main room. You'll usually see him holding a microphone up on the Show Stage until later in the game.

"YOU BLINKED."
"♪Bonnie's my name, I'm hoppin' along / Floppy ears and a cotton tail / My guitar is blazin'! This rabbit's hare-raisin' / Just listen to me wail!♪"
TIME TO FACE THE CONSEQUENCES OF YOUR FAILURE."''
— Withered Bonnie
Voiced by: Joe Gaudet (Dummied Out lines as Classic Bonnie in Help Wanted), Hans Yunda (as Withered Bonnie)

When Bugs Bunny runs out of carrots, this is what you get — A big purple (or blue) rabbit wearing a bow tie, Bonnie is a secondary character to Freddy, usually seen holding an electric guitar and standing to Freddy's right.

"I WAS THE FIRST. I HAVE SEEN EVERYTHING."
"♪Hey, I'm Chica, the lady of the group / My singing is a treat / But keep an eye on your pizza / CUZ I'M A BIRD WHO LIKES TO EAT!♪ NOM NOM NOM NOM!"
"COME CLOSER. LET US SMILE TOGETHER."
— Withered Chica
Voiced by: Amber Lee Connors (Dummied Out lines as Classic Chica in Help Wanted), Darbi Worley (as Withered Chica), Heather Masters (in Freddy and Friends on Tour animated shorts)

What happens when Tweety Bird takes steroids? You get a big yellow bird wearing a bib. She carries around an adorable little cupcakenote Lies. It can also kill you by the end of the series!. Chica usually stands to Freddy's left.

For what ye've done, ye'll be walkin' th' plank!
"Also, check on the curtain in Pirate Cove from time to time. The character in there seems unique in that he becomes more active if the cameras remain off for long periods of time. I guess he doesn't like being watched. I don't know."
— Phone Guy
"Arrgh! Ye never stood a chance!"
— Foxy
Voiced by: Christopher McCullough (as Classic Foxy), Yoon Ho (in Ultimate Custom Night anime cutscenes), Unknown (as Classic Foxy's singing in 1)

Foxes are normally cute. This one most certainly isn't — Foxy is a red fox inhabiting an out of order display in Pirate Cove, and is rarely seen outside of it.

Now you see me… now you don't.
Golden Freddy is what happens when Freddy develops a bad temper and gets a paint job but, despite everything, you might not see this character at all, since he's not an actual Fazbear Entertainment® mascot… not anymore, at least. If you trigger him, though, you'll see a discolored costume that looks like Freddy Fazbear sitting in the room with you. If you don't look back to the camera view and immediately change views, he'll give you a Non Standard Game Over and shut the game off.

Golden Freddy returns in 2 alongside the original four, capable of stalking the hallways and attacking you like the rest from Night 6 onward, and he has forgone the "summoning ritual" and just warps into your office while you're watching the cameras whenever he feels like it. Again, the way to get him to leave is to ignore him completely, either putting on the Freddy head or looking at the cameras, but definitely not shining the light down the hallway.

In 4, it is implied that the animatronic we know today as Golden Freddy used to be known as Fredbear and was brought over from Fredbear's Family Diner (that or he is a remodeled version). See here for tropes solely dealing with Fredbear, although expect for many overlaps.

Golden Freddy returns as an enemy in Ultimate Custom Night. 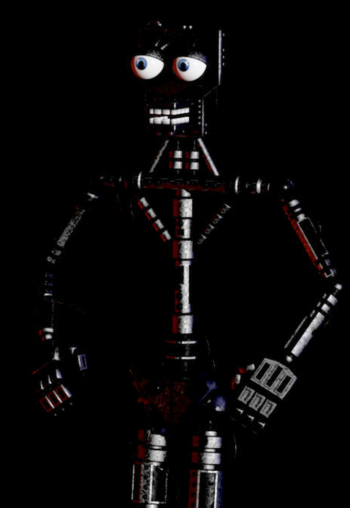 A random endoskeleton that is present in the Backstage of Freddy Fazbear's Pizza, normally not doing anything except for staring at the camera in an admittedly creepy Easter Egg. It's pretty much the same endoskeleton that is used for all four classic animatronics, except it was never made clear to whom this particular endoskeleton belongs. The name of its adventure counterpart in Five Nights at Freddy's World, and later Help Wanted, cement its name as Endo-01.