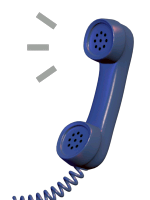 Ring ring, is that you on the phone...
"Hello, hello? Uh, I wanted to record a message for you to help you get settled in on your first night. Um, I actually worked in that office before you. I'm finishing up my last week now, as a matter of fact. So, I know it can be a bit overwhelming, but I'm here to tell you there's nothing to worry about. Uh, you'll do fine. So, let's just focus on getting you through your first week. Okay?"
— Phone Guy
Voiced by: Scott Cawthon

Your character's predecessor in the graveyard shift for the first game. He knows that the employee orientation they gave you left out a few things — okay, a lot of things — so he's left you a series of pre-recorded messages that play over the telephone in your office. Just a few pointers to show you the ropes. He returns for the second game, managing to guide you through the first six nights, although he spends just as much time doing that as he does trying to reassure you that all is well in the pizzeria. He (technically) returns in the third game, in the form of old audio logs, and appears as an Easter Egg in the fourth game, but doesn't appear after that until Ultimate Custom Night and Five Nights At Freddys VR Hel P Wanted.

"Hey, hey, glad you came back for another night! I promise, it'll be a lot more interesting this time!"
— Phone Dude
Voiced by: Scott Cawthon

A new person has taken up the task to tell you the machinations of Fazbear's Fright. He's much more laid-back than the old Phone Guy, but retains that same passion for all things Freddy Fazbear.

Someday This Will Come in Handy.
"I will be your personal guide to help you get started. I'm a model five of the Handyman's Robotics and Repair Unit System, but you can call me HandUnit."
Voiced by: Andy Field (default setting), Jesse Adam ("Angsty Teen")

The automated guide system at Circus Baby's Pizza, HandUnit is there to help you learn about you job so you survive...right? A similar character, called Tutorial Unit in the credits, is present in Pizzeria Simulator, who reappears in Special Delivery. A third counterpart, Dread Unit, occasionally makes announcements during Security Breach.

"If you are playing this tape, that means that not only have you been checking outside at the end of every shift, as you were instructed to do, but also that you have found something that meets the criteria of your special obligations under Paragraph 4."
Voiced by: Dave Steele

The recorder of a series of cassettes played at the end of every shift in Freddy Fazbear's Pizzeria Simulator. He instructs the player to test the response of various salvaged animatronics to audio stimuli, and is implicitly their boss. He's actually Henry Emily and the owner of the original Freddy's, alongside Afton, and is planning to end the Fazbear legacy for good.

"Hello? Can you hear me? Don't exit this room, OK? This isn't a mistake. This room isn't a mistake. I had to hide these logs away from the core gameplay files in a place that only a beta tester would look and in a place where the files could be protected. I just really, really hope that the next development team finds this before the game is released to the public."
Voiced by: Briana Kennedy

A member of the Quality Assurance team for The Freddy Fazbear Virtual Experience. She worked on the game as normal until a mysterious series of events forced the team into bankruptcy. To prevent further disaster, she created a series of audio files detailing her experiences with the game and hid them throughout its code for the next beta tester to find.