Five Nights at Freddy's Main Character Index
Character-specific pages: William Afton
Animatronics: In general | Games: First Generation, Second Generation, Third Generation, Fourth Generation, Fifth Generation, Sixth Generation, VR Generation, Seventh Generation, Adventure Characters | Novels: Silver Eyes Continuity, Fright Generation
Humans: Protagonists, Instructors, The Afton Family, Other Humans
Miscellaneous: Companies
Advertisement:
These completely revamped counterparts of the old Fazbear-crew are set to rock Freddy Fazbear's Mega PizzaPlex. And it seems they won't be out to kill everything with a pulse this time! Joy! Not that that makes you any safer from getting killed in this game, though... 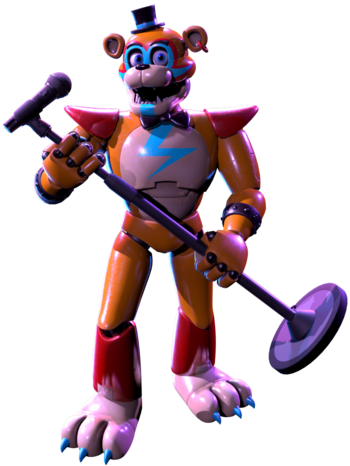 "Well done, Superstar!"
"You should be able to escape when the security doors reopen at 6:00 a.m. Until then...keep moving, and try not to draw attention to yourself. If there is another way out, I will help you find it. I promise."
Voiced by: Matt Ellis (Fury's Rage), Kellen Goff (Security Breach)

Freddy's incarnation in this game. He's the vocalist of the glam rock band, and one of the only bots that isn't trying to hurt Gregory. Instead he's helping the poor boy try and escape the building while avoiding the other hostile bots. 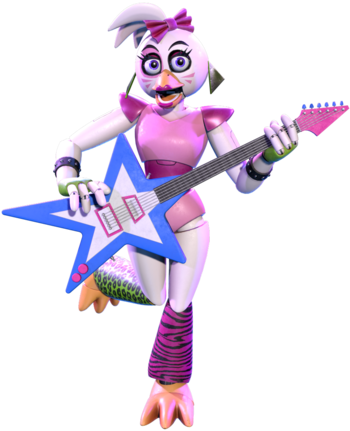 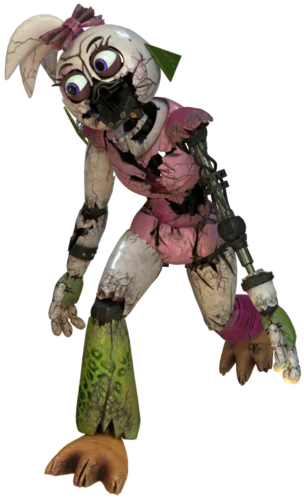 The newest incarnation of Chica the Chicken. She's the guitarist of the glam rock band. She’s also the star of Mazersize, the Pizzaplex's maze area. 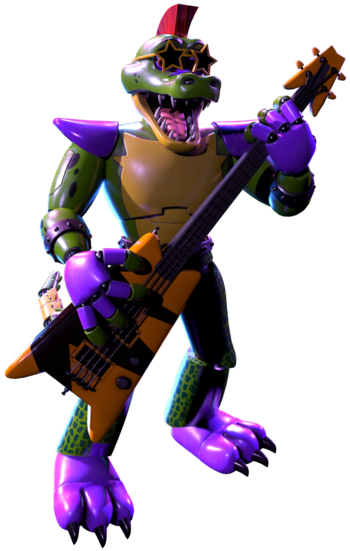 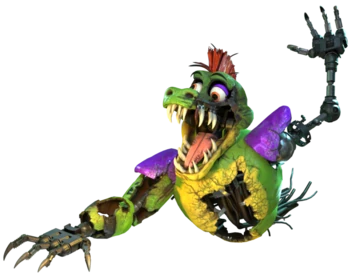 A new addition to the Fazbear Family. He's the bassist of the glamrock band, and the replacement for Glamrock Bonnie after his Noodle Incident. He also is the face of the PizzaPlex's mini-golf course, Monty's Gator Golf. 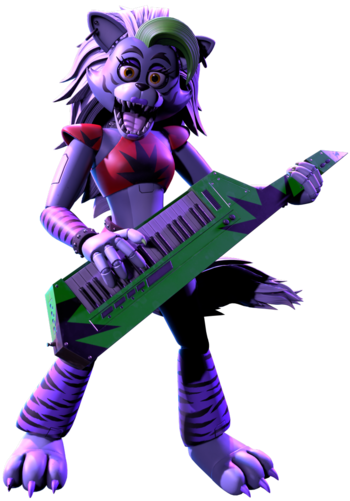 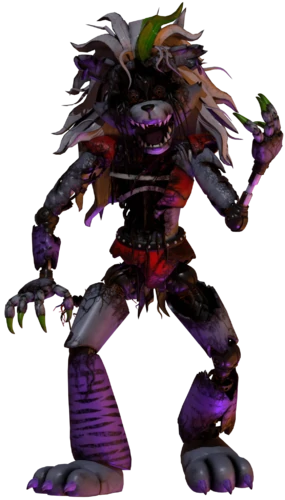 A newcomer in the Fazbear Family. She acts as the keytar player for the glam rock band. She also has a go-kart track, Roxy Raceway, that is currently under repairs. 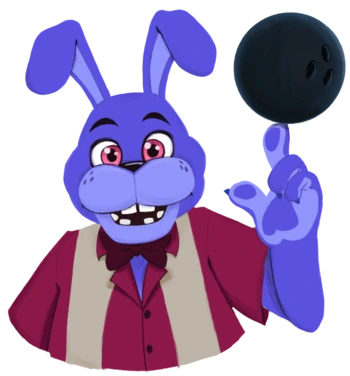 It was supposed to be me!

The original bassist of the gang, and the newest version of Bonnie the Bunny. He was replaced by Montgomery at some point prior to the events of the game, though he remains the face of the PizzaPlex's bowling alley, Bonnie Bowl. 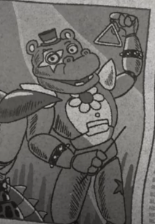 The newest member of the band when Monty takes over as The Face Of The Band in one of the endings. 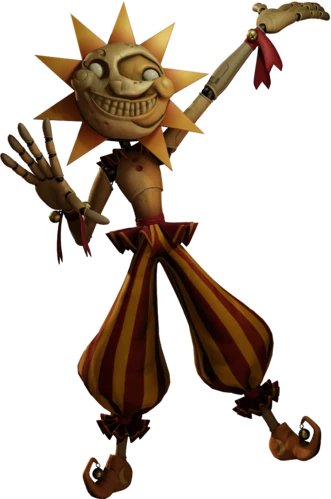 "Hello, new friend! You're sure up late! Are we having a slumber party? Where are all your friends?" 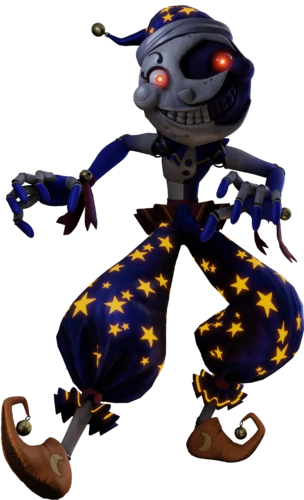 "Naughty boy…"
"We can fingerpaint, tell stories, drink Fizzy Faz until our heads EXPLODE and stay up all night! There is only one rule: keep the lights on. ON. ON…"
— Sun
"Bad children must be found…
Bad children must be punished."
— Moon
Voiced by: Kellen Goff

A horrifying animatronic at Freddy Fazbear's Mega PizzaPlex who protects the Daycare area. While normally in its jovial (albeit overbearing) Sun form, it becomes its much scarier and hostile Moon form once the lights go off, which it wants to prevent. 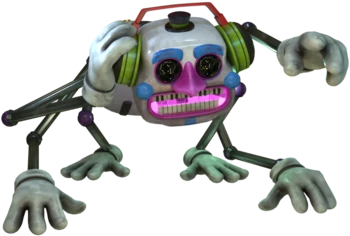 The itsy-bitsy spider climbed up the water spout...
A giant-sized version of the Freddy Fazbear's Pizzeria Simulator animatronic, teased in "Freddy & Friends: On Tour" episode 3 and shown outright in the "State of Play" trailer. He hangs around in the Arcade.

Do not be alarmed. This is a kindness.

A set of robots that can be found around the PizzaPlex. Their jobs include waiting on customers, cleanup, and security, with there likely being more jobs we have yet to see. 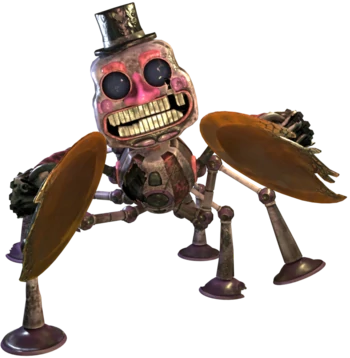 ...in came the child and brought the spider out.
Tiny toy versions of the original Music Man that crawl through the vents.
Glamrock Endos 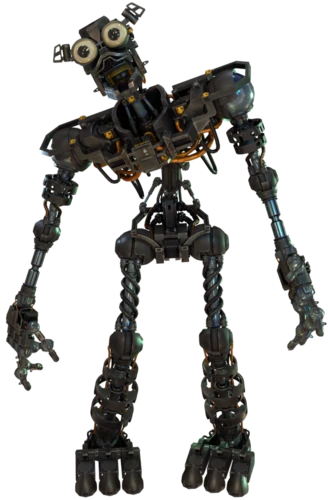 Don't turn your back. Don't look away. And most of all, don't blink.
Endoskeletons that appear in Parts and Service.
The Blob (Spoilers) 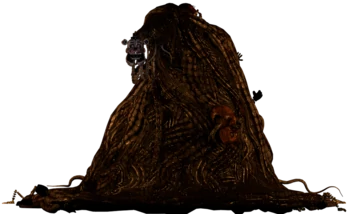 The Blob is an animatronic that appears in Five Nights at Freddy's: Security Breach; it is located in the remains of Freddy Fazbear's Pizza Place.