Five Nights at Freddy's Main Character Index
Character-specific pages: William Afton
Animatronics: In general | Games: First Generation, Second Generation, Third Generation, Fourth Generation, Fifth Generation, Sixth Generation, VR Generation, Seventh Generation, Adventure Characters | Novels: Silver Eyes Continuity, Fright Generation
Humans: Protagonists, Instructors, The Afton Family, Other Humans
Miscellaneous: Companies
The animatronics of the
Advertisement:
this-time-we're-not-kidding-this-is-the-absolutely-and-totally-final game. They don't have a certain prefix to their name, instead having unique names of their own — and all but four of them are entirely passive. However, those four are generally dubbed "the Salvages", who are the last remaining animatronics of the Fazbear line after the fire that destroyed Fazbear's Fright. And they're trying to defile your pizzeria and the animatronics who live within...

The remains of Ennard. With Baby having been ejected some time ago, Funtime Freddy is in charge now, while Ballora and Funtime Foxy do nothing and Bon-Bon is never mentioned. See Five Nights at Freddy's: Fifth Generation for tropes relating to their appearance in Sister Location.

"You're not who I expected to see."
"You don't really know who your employer is... do you?"
Voiced by: Heather Masters

Baby after having salvaged herself, utilizing a giant Power Pincer for an arm and roller skates on her feet. See Five Nights at Freddy's: Fifth Generation for tropes relating to her appearance in Sister Location.

Never heard of you before...or have I?
"Shhhh...it will all be over soon..."
Voiced by: Lena Hill

While those four are the only ones that can attack you, others can be purchased for the pizzeria.
In General
Helpy 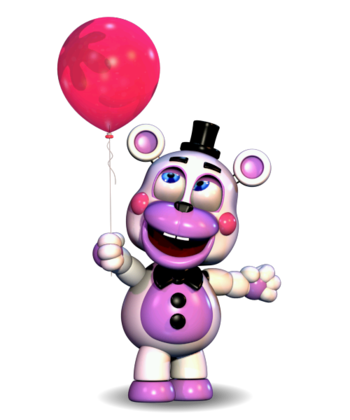 The Mini Funtime Freddy that helps you throughout the pizzeria.

Trash and the Gang

Low budget animatronics that one could purchase from the Dumpster Diver Weekly catalogue. Animatronics in this category are Bucket Bob, Mr. Can-Do, Mr. Hugs, No. 1 Crate, and Pan Stan. Buying and setting all of them up unlocks the "Trash and the Gang" achievement. A group of mediocre animatronics consisting of Happy Frog, Mr. Hippo, Nedd Bear, Pigpatch, and Orville Elephant, who can all be purchased from Stan's Budget Tech, with the exception of Orville, who's purchased from the Rare Finds Auction. Buying and setting all of them up unlocks the "Mediocre Melodies" achievement. 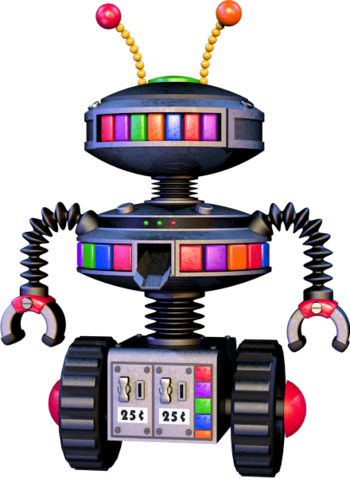 A robot that dispenses candy to children. Sometimes it tells a story. 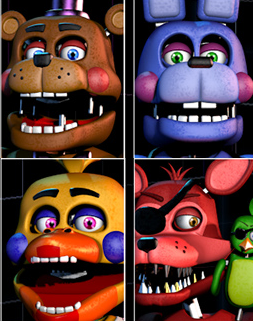 This game's incarnations of Freddy, Foxy, Bonnie, and Chica, which might possibly be the basis for the Nightmare animatronics. They are unable to be purchased until the Smiles and Servos catalogue is unlocked. Buying and setting all of them up (with Lefty) unlocks the "Rockstars Assemble" achievement. Animatronics only found in the Rare Finds Auction catalogue. Expensive, but with good entertainment value. Animatronics in this category are Music Man, El Chip, and Funtime Chica. Buying and setting all of them up unlocks the "Posh Pizzeria" achievement. 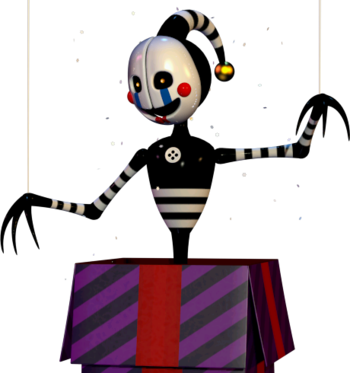 Come closer, and you'll float too.

A security animatronic made in the likeness of the Puppet. Play-testing it leads to an Easter Egg. 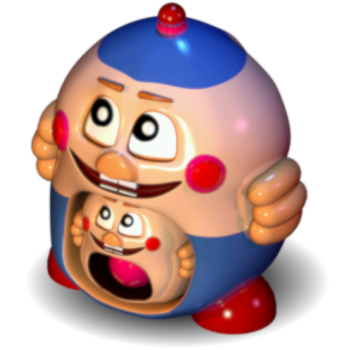 Can I offer you a nice egg in this trying time?

A giant Balloon Boy-esque machine that can be purchased via the Rare Finds Auction. It's also a Data Archive that holds some very interesting (and sensitive) information. 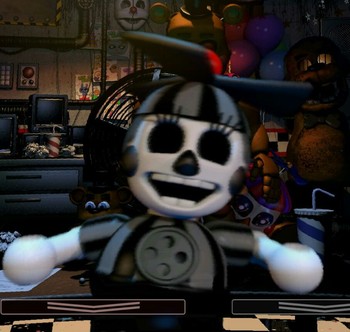 ETANUTROFNU WOH, HO HU!
Voiced by: Stephanie Belinda Quinn
A black and white version of Dee Dee with no eyes that can summon all of Dee Dee's roster. She only appears in 50/20 mode (rarely in other times) to summon secret characters.
Fredbear 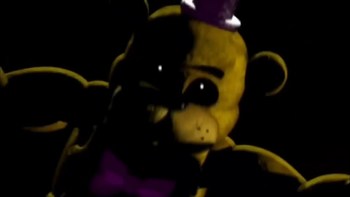 "There's more fantasy and fun where I came from."

Voiced by: Kellen Goff
The Monster Progenitor of the other characters of all the games. Along with Spring Bonnie, he served as the mascot of Fredbear's Family Diner, Fazbear Entertainment's first eating establishment. He was discontinued when the restaurant faced closure (implied due to the Bite of '83) and presumably remodeled as Golden Freddy, but by 1987, Golden Freddy has been scrapped as well.

In the Ultimate Custom Night, he only appears when you attempt to use the Death Coin on Golden Freddy when his AI is set at 1.