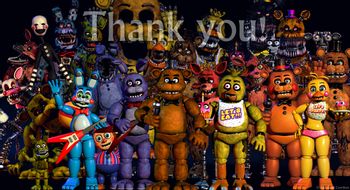 Meet your new co-workers... before they meet you.note Not pictured: JJ, the Phantom and Shadow animatronics, and any animatronics from the Halloween Update to Five Nights at Freddy's 4 and onwards.
"Uhh, the animatronic characters here do get a bit quirky at night, but do I blame them? No! If I were forced to sing those same stupid songs for 20 years and I never got a bath? I'd probably be a bit irritable at night too."
— Phone Guy

The main attraction of Fazbear Entertainment establishments, and your main foes.