Five Nights at Freddy's Main Character Index
Character-specific pages: William Afton
Animatronics: In general | Games: First Generation, Second Generation, Third Generation, Fourth Generation, Fifth Generation, Sixth Generation, VR Generation, Seventh Generation, Adventure Characters | Novels: Silver Eyes Continuity, Fright Generation
Humans: Protagonists, Instructors, The Afton Family, Other Humans
Miscellaneous: Companies
Advertisement:
These animatronics do not serve as a Fazbear attraction, and for good reason. They are essentially the creepiness of the original animatronics taken up to eleven and with none of the cuddly charm, and nearly all of them are given the moniker "Nightmare", befitting their toothy and horrifically twisted appearances. They serve as the primary threats in the fourth game.
open/close all folders

General
The original four are back once again (with a couple new friends as well), and they're even more terrifying than ever before.
Nightmare Freddy 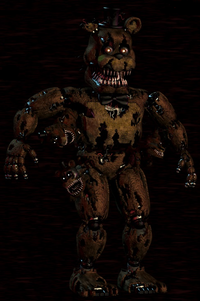 "No light can save you now."

"What a gift to relish... a victim that can't perish."

Voiced by: Tim Simmons
The monstrosity shown on the first preview image, this animatronic resembles an extremely withered Freddy, and it is plastered with sharp toothed Freddles erupting from the ruptures in its suit.
Nightmare Bonnie

Much like Freddy before him, Bonnie's been given a scarier, much more nightmarish treatment, and from his sharper, nastier set of teeth, it looks like he doesn't mind running out of carrots this time around.
Advertisement:
Nightmare Chica 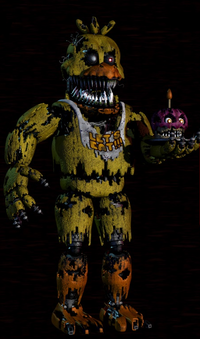 Three in a row, Chica's given herself a nightmare-inducing makeover… and decorated her cupcake likewise.
Nightmare Foxy 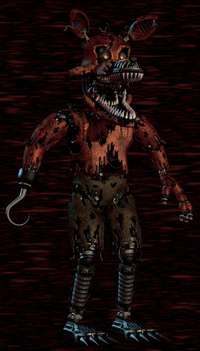 Rounding out the gang is Nightmare Foxy, who traded teeth for tongue. In his teaser image.
Nightmare Fredbear 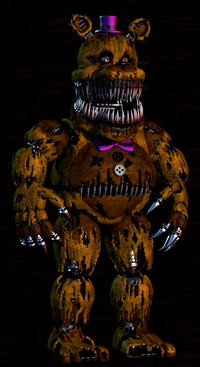 "Let me put you back together, then take you apart all over again."

An animatronic seemingly featured in the fifth and sixth teasers, who has a purple top hat and bowtie. Composed of a golden yellow, the only sign of its face has been a very faint reflection in the fifth teaser, and the latter teaser revealed it had a giant, toothy mouth on its stomach. Its identity was revealed through deciphering some code on Scott's website once the game's sixth update was posted here 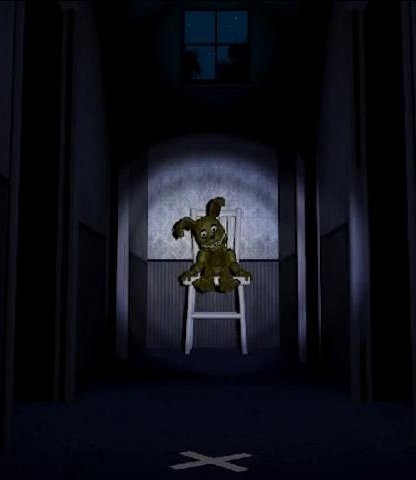 A miniature version of Springtrap. He appears in the seventh teaser with the caption "Terrible things come in small packages."
Nightmare 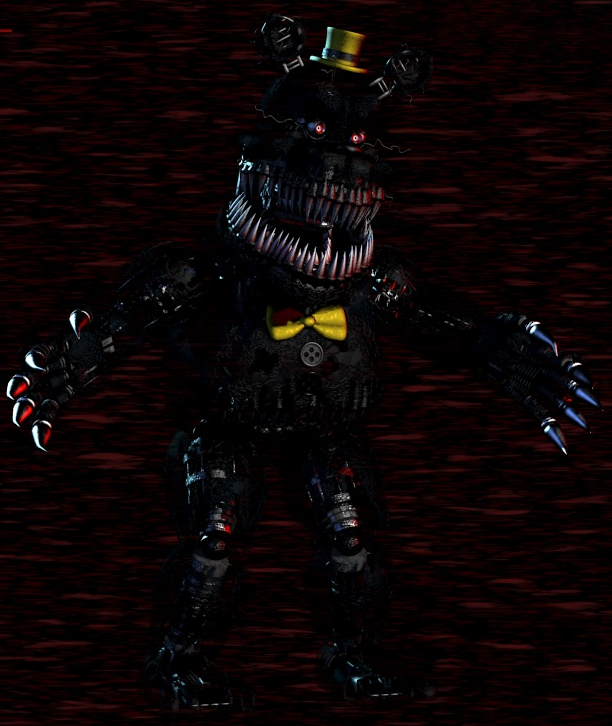 "THE SHADOW FEARS ME."

A mysterious animatronic hinted at in the last few teasers, given the teaser animatronic had a black body. He looks just like Nightmare Fredbear, but he's a deep black instead of gold and he has a yellow hat and bowtie, as opposed to purple. However, he only shows up in the last two hours of the seventh and eighth nights as a replacement for Fredbear.

Exclusive to the Halloween Edition 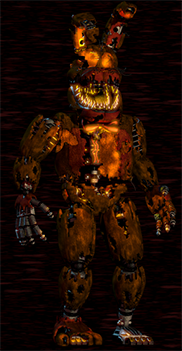 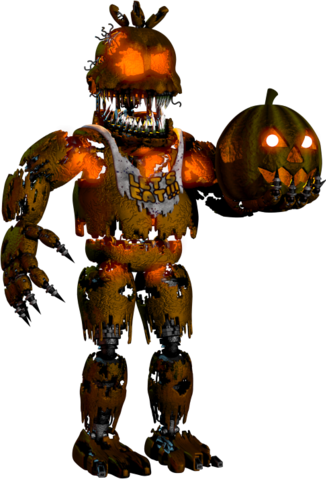 "Greetings, from the fire!"

"The fire within me burns eternal, and now you shall as well!"

Voiced by: Keyondra Shannae
The last bonus animatronic revealed: a Halloween-themed re-skinning of Chica, complete with a Jack-O-Lantern replacing her cupcake. She shares tropes with her normal Nightmare counterpart, and Jack-O-Bonnie.
Nightmare Mangle 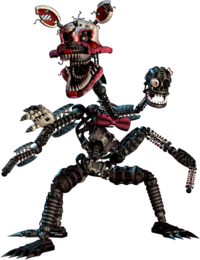 COME HANG OUT.
The third of the bonus animatronics revealed, Mangle receives the Nightmare treatment… and boy, does it look no better for it.
Nightmare Balloon Boy 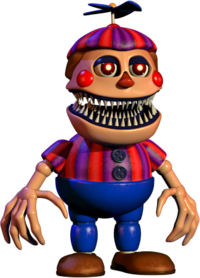 "Flash that light all you want. It can't save you, now!"

Voiced by: Matthew Curtis
Revealed on scottgames.com in October after Jack-O-Bonnie, BB shows up in Nightmare form too, because the Child's nightmares just aren't complete without an off-kilter version of his own species. He has a lot of the same tropes as his regular counterpart. Surprisingly, he was added to the original game after the Halloween update. Scott elaborated in a livestream that he is canon to the story

Voiced by: Aleks Le
The second bonus animatronic revealed (though one must brighten "dontwakethebaby.jpg"). Following a notable absence (Wild Mass Guessing aside), the Creepy Doll returns — to plague the player's nightmares. Shares most of the same tropes as the regular Puppet.
"I AM THE FEARFUL RELFECT-FLECTION OF WHAT YOU HAVE CREATED..."