"Uh... you're only the second guard to work at that location. Uh, the first guy finished his week, but complained about... conditions. Uh, we switched him over to the day shift, so hey, lucky you, right? Uh, mainly he expressed concern that certain characters seemed to move around at night, and even attempted to get into his office."
— Phone Guy

Another unnamed character who Phone Guy refers to several times in Five Nights at Freddy's 2. You inherited his job after he was moved to the day shift because he complained about the animatronics moving around.

Fazbear Entertainment was flourishing, providing entertainment to many families... then disaster sent the company into a downward spiral. At least sixnote The exact number is ambiguous. The first game says two, then a total of five. The second game implies anywhere from five to eleven. The "Happiest Day" minigame in the third game when the children finally pass on shows eleven children in total, but only six are monochrome and pass on to the great beyond (the ones haunting the original four, plus Golden Freddy and the Puppet), indicating that the party is for living children, while the ghosts merely "tag along". 4 implies that there was a seventh ghost involved in the Fazbear hauntings via its unexpected ending. Pizzeria Simulator seems to stick with "Happiest Day", as there are six gravestones shown in the "Lorekeeper" ending. children were murdered, and soon afterwards, the Fazbear animatronics began to smell and act up during the nights. The most common theory is that the first victim was an isolated incident, and that child inhabited the Puppet, as both are known for their faces that look like they have streaks of tears. When the Murderer killed five other children, the haunted Puppet placed them into the Freddy, Chica, Foxy, Bonnie, and Golden Freddy animatronics, causing them to become haunted as well. 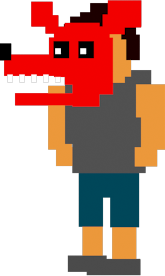 The older brother of the child in 4. He's a complete asshole. May or may not also be Michael Afton. 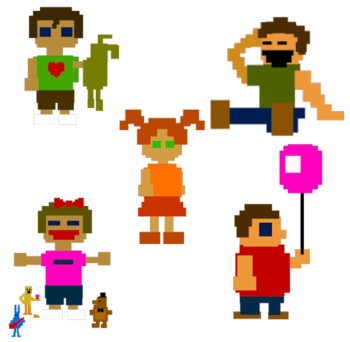 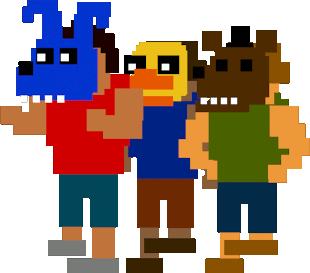 Maybe the masks aren't such a good idea.
The friends of the Child's brother. They're all assholes too, naturally.
Fredbear Plush

A manifestation in the form of a plush-toy and implied to be the Child's favorite character of the Fazbear crew even with his crippling fear of the animatronics. For the actual animatronic, see Golden Freddy in the first game's character page.

This is some kind of weird couple.
Voiced by: Christopher McCullough (Vlad) and Amber Lee Connors (Clara)

The leads of Sister Location's Soap Within a Show, The Immortal and the Restless. 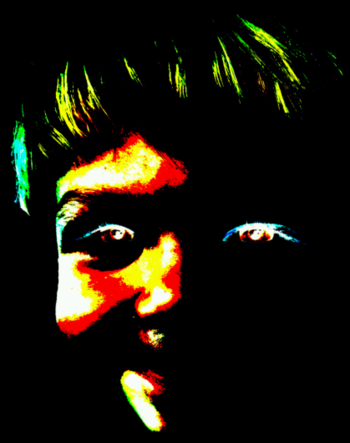 "I have seen him - the one you shouldn't have killed."

The spirit appears in Ultimate Custom Night, sometimes seen flickering in the background of the Game Over screen. Barely anything is known about the spirit, except that they are one of William Afton's many victims, and it's all but stated that they are the spirit that possessed the Golden Freddy animatronic suit.

Some animatronics refer directly to the spirit, usually as 'The One You Shouldn't Have Killed', revealing that they are the one behind the torture going on in Ultimate Custom Night. The spirit can be heard in the background during certain Game Over lines of the Mediocre Melody troupe.

An employee at the game company Tape Girl worked at. He was a beta tester for The Freddy Fazbear Virtual Experience. Emphasis on "was". The events that led to his, shall we say, "departure" are what spurred Tape Girl to make the audio files. He is probably not the same Jeremy from FNaF 2.
Advertisement:
The Indie Developer (spoilers unmarked!) 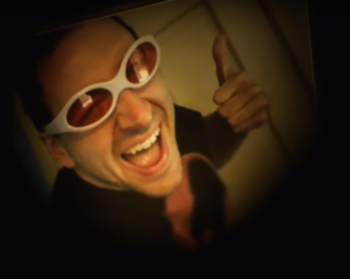 A game developer who created a series of survival horror games starring Freddy and the Fazbear crew. Before you ask, he's not Scott Cawthon

and the games aren't the FNAF series... but they might as well be. You see, Fazbear Entertainment's reputation was experiencing a bit of a setback, what with the child murders that dogged every business venture they made. They needed a way to put it all behind them... and to do that, they hired this guy to make games based on the rumors. That way, anyone who tried to seriously look into the murders could be dismissed as an overzealous fan. The perfect cover-up... until Tape Girl entered the scene.

Also known as "The Reluctant Follower", Vanny is a mysterious female figure who appears to be working with Glitchtrap. Her mask can be found in the Corn Maze through an Easter Egg in Help Wanted's "Curse of Dreadbear" DLC. If put on while holding Glitchtrap's plush, her voice will be heard. She makes a full appearance for Security Breach, and it looks like she may bring back an old Fazbear tradition...

For more information see "The Beta Tester" on the Protagonists page. 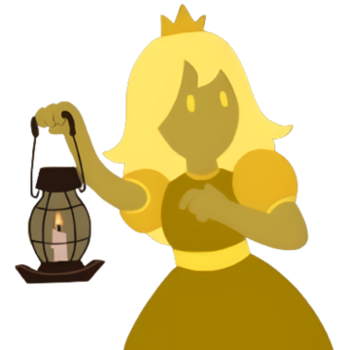 The main protagonist of Princess Quest, an old mobile game that had been ported into an arcade cabinet. She may or may not be a representation of Vanessa.

An IT employee at Fazbear Entertainment who is the writer of several unintended emails you can read in Special Delivery. His emails deal with his co-worker, Ness (AKA Vanessa, AKA Vanny), and her increasingly bizarre behavior. Unfortunately, Ness... isn't doing so well.
Pizzaplex Staff

The human workers that helped keep the Pizzaplex somewhat running smoothly before being replaced by the S.T.A.F.F. bots... or worse. Messages from them can be found all over the Pizzaplex.