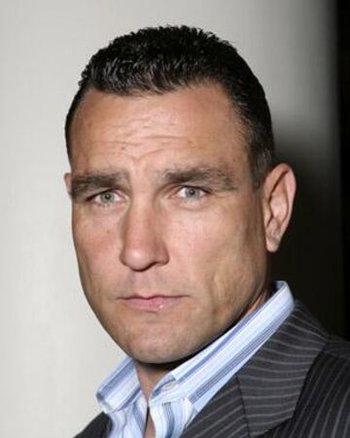 "We all carry our past. But it is a case of getting on with your life and improving it, if you want to."
Advertisement:

Vincent Peter Jones (born 5 January 1965 in Watford, England) is a British actor and former footballer who played from 1984 to 1999 for various teams, including Wimbledon, Leeds United, Sheffield United, Chelsea, Queens Park Rangers and Wales note  for whom he was eligible due to one of his grandparents having been born there. Meaning that unlike several actors who originally wanted to be professional sportspeople, he actually was one before going into acting. On the pitch, he cultivated a "hard man" image thanks to his aggressive and physically uncompromising style of play; this image has followed him into his second career in which he is often typecast as a violent criminal or thug — even in this educational video