Tropes for the characters of the video game Heartbeat. (The television series is not covered).

Warning! Some spoilers are unmarked on this page. 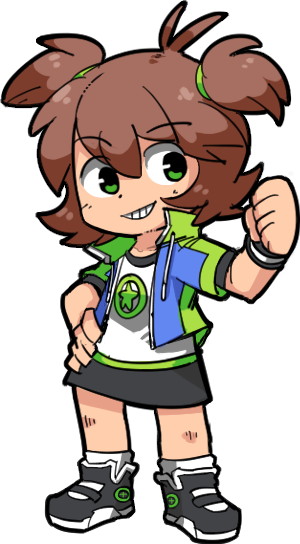 Eve Staccato is a human Yin Conjurer from Sunwich and the main protagonist of HEARTBEAT. 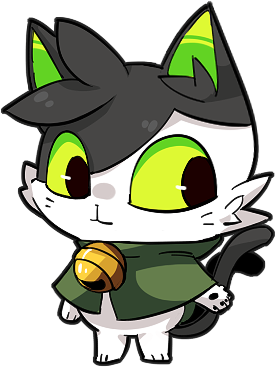 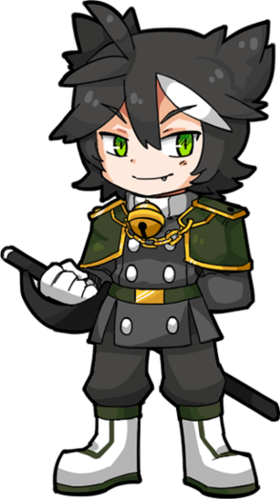 Klein Gremory is a Cat Sith from the Den and a pacted Mogwai partner to Eve Staccato. She used to be pacted to Eve's great-grandmother, and wants to make sure Eve becomes a great Conjurer. 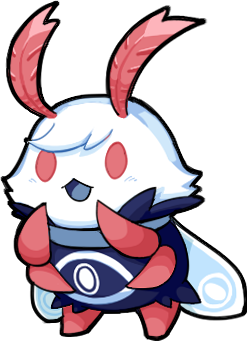 "Kum-pum-pum-puchi!"
A strange creature found by Choi, the only one to hatch out of its clutch. Eve adopts them and they join in on her journey.
Troz Nebarius 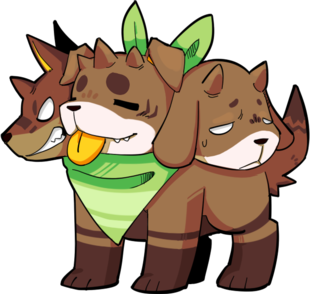 Troz Naberius is a young Cerberus Mogwai from the Den, and Rex's personal "buddyguard", who left the Den in search of her after being attacked by a mysterious thief. 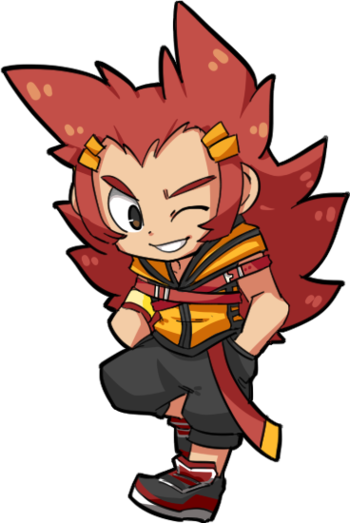 "I find these truths to be self-SHREVIDENT!"

Rex Kimaris is a Manticore born and raised in the Den Castle by Queen Verrine. Despite being a princess she acts very informal, referring to others with phrases like "dude", and doesn't seem to take part in any sort of royal duties 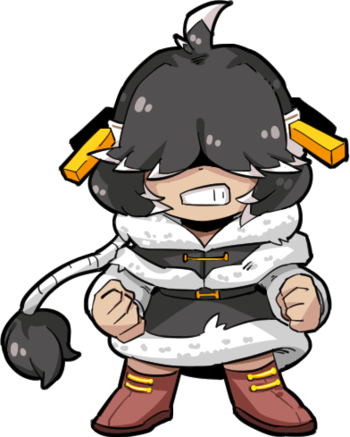 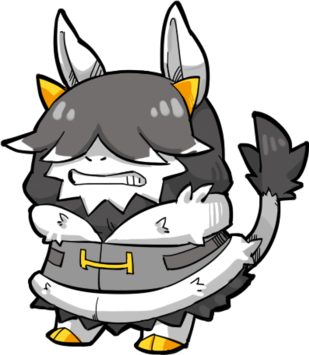 Chip Morax is an Earth-element Minotaur Mogwai from the Den and is Blitz's older sister. Pacted to Ann Galliard, she has a passion for documenting all the Mogwai in Outset. 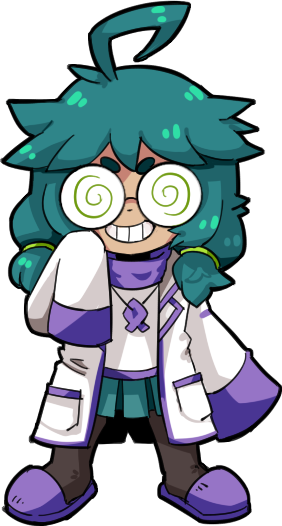 "In a perfect world, the geek gets the girl."

Luca Stolas is a Gyochu Mogwai from the Den. She runs shady medical practices and experimental treatments on Mogwai. Lives with Patch Godunov in Otecho. 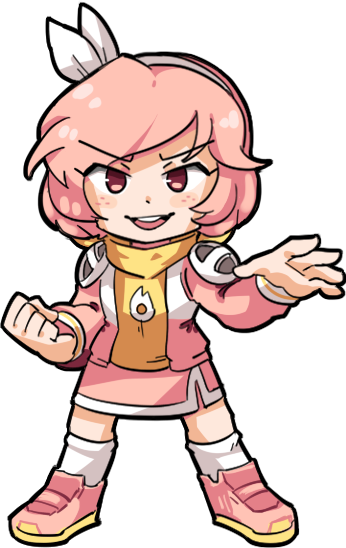 "If anyone bothers you: Stab, stab, cut."

Io Haborym is a Wisp Mogwai from the Den. She was once an Ice element Mogwai, but after a procedure with Luca, she shifted to Fire as her new element in hopes of being better than other Wisps. 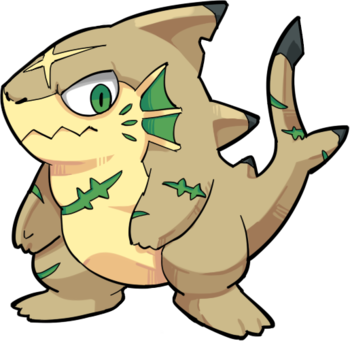 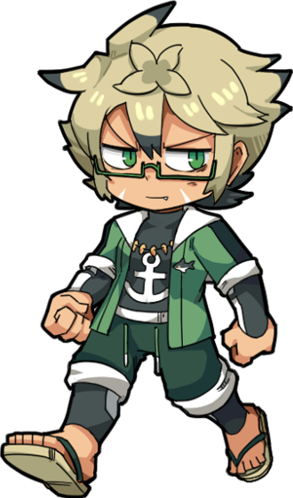 Pike Crocell is an off-coloured Sahuagin who hatched in the Outset. She's a member of the Terror Trio, acting as their main informant, working alongside Wake and Skip who serve under General Yorshk. 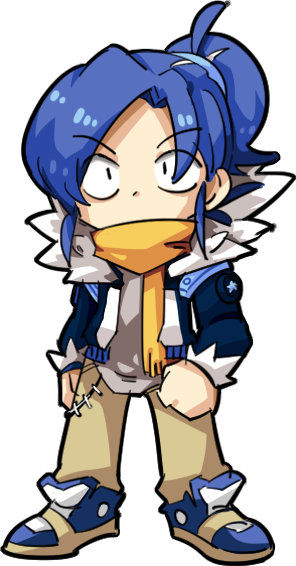 Nyx Ronove is a strange wanderer that the party first meets in Corona Woods. It's eventually revealed that Nyx is an escaped convict from the Den, who's been going around attacking Mogwai for shards for an unknown purpose. 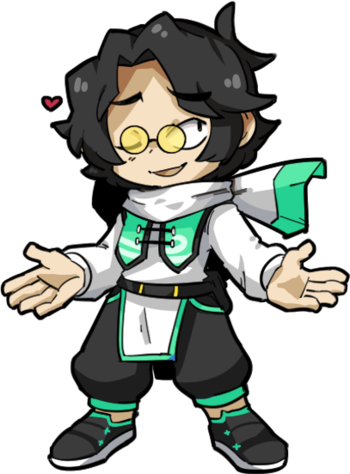 "I hope you kept the receipt for that ring."

Kon Verrine is a Dragon from Snowver. Her egg was spawned in the Den, but was taken to Outset, where it was hatched. She is pacted to Rain Sicilienne

Choi Yumisun
An old Conjurer living in the Corona Woods, who tasks Eve with destroying the Red Eyed Clusters terrorizing the Outset.
Zheng Dantalion
An Earth-affinity Tesso pacted to Choi, and Fang's younger sister. She was the first caretaker of Mott and can advise Eve about how to care for them.
Fang Dantalion
A Flora-affinity Tesso pacted to Choi, and Zheng's older sister. She's collecting fish from the Outset to raise for her twelve wives and hordes of children back in the Den and rewards Eve for each new species she finds. 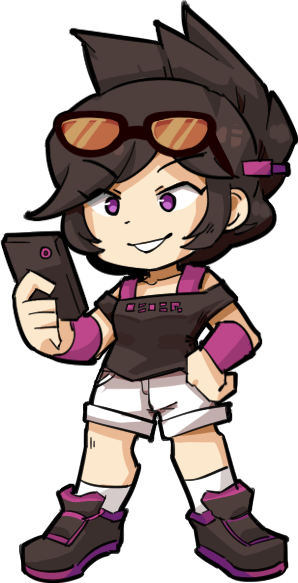 June Sanjo is the Conjurer of Solburg. Eve first meets her in Corona Woods attempting to take photographs of feral Mogwai. She doesn't become a Conjurer until after Eve defeats Troz. 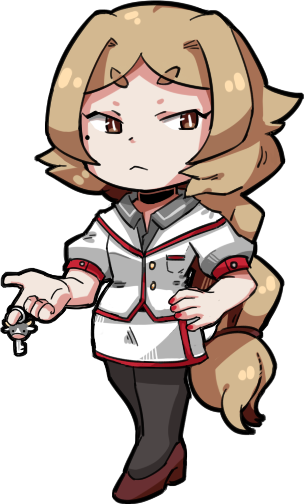 Ann Galliard is the Conjurer of Aeros, alongside her younger brother Rick. She's first encountered bumping into Troz while attempting to run back to work from home. Ann is June's older cousin.

Sand Bar Museum
A museum run by four Mogs in the Sand Bar devoted to compiling fish and records. 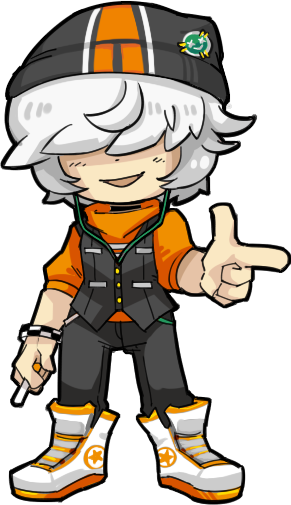 Patch Godunov is the Conjurer of Otecho and the sole member of the punk rock band Blinking4Soup. She's first seen busking on the streets surrounded by a myriad of dedicated fans. 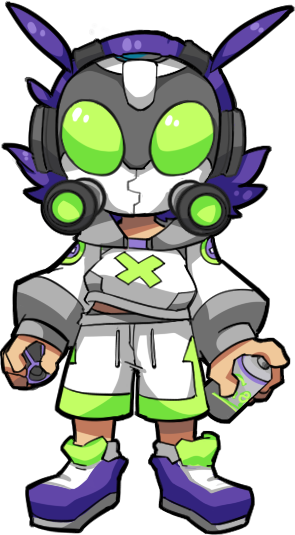 "Cassettes only, no CDs お願いしまs."

Cache Monet (Real name: Leigh Huluna) is a Conjurer from Otecho. She lives next door to Patch Godunov and is known to throw loud and outrageous parties.

The Squatchstack
A trio of sheep Mogwai who operate the Sheepsquatch Sleeping Sacks found around Solum, as well as caring for some very strange "puppies". 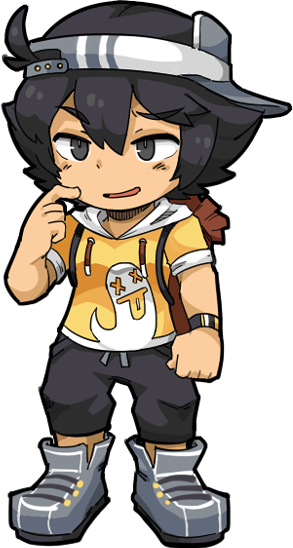 "Should I bring my inhaler for this?"

Rebecca "Beck" Ondo is the Conjurer of Harbei. Eve first meets her at the Harbei Hospital where Luca and Chip interrogate her about her Mogwai's whereabouts. 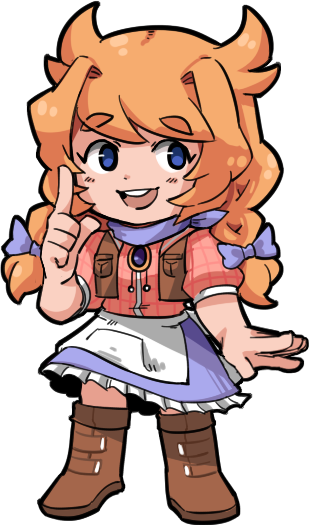 "I haven't the slightest doubt!"

Belle Reed is the Conjurer of Bowfort, who works on her father's farm and is good with her hands. 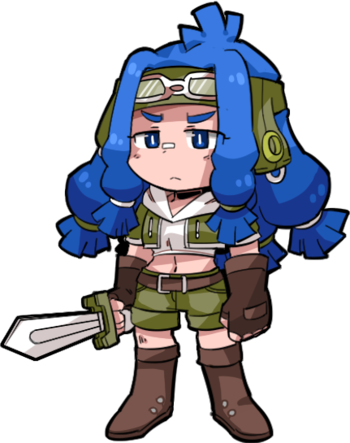 "Cool and bold. Precise and grand."

Rain Sicilienne is the Conjurer of Snowver. She's first seen hunting a certain Mogwai around Route 182 before revealing her identity as a skilled Mogwai hunter from Snowver. 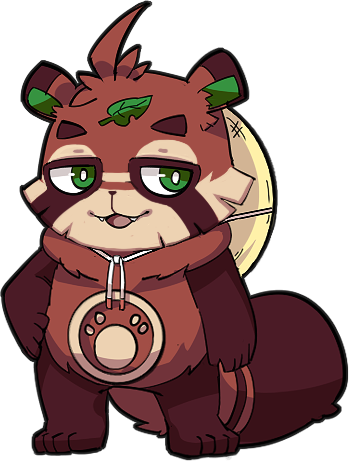 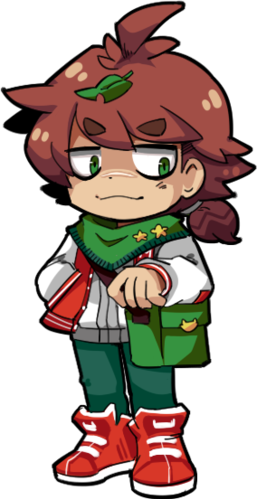 "Is this tax-free? How much per pound?"

Shep Seere is a Tanuki who moved to Outset after feeling as though it was an untapped market that The Den wasn't utilizing. She's also responsible for the Sewers that allow people to move around Outset quickly.

Huo and Xiu Wukong
Sisters who run a gambling business in Corona Woods. Huo sets up shop early in the game, while Xiu only joins her in the post-game, though their wayward brother has quit the family business and gone somewhere else.
Ven Berith
An Ice affinity Jiuweihu who sets up shop in the Sewers and can perform weapon and item alchemy for the party.
Big Sean, Dr. Brainy, and Coach Flexo
A trio of Raksasha Mogwai Brothers who set up residence in the Sewers and challenge the party.
Ives Furcifer
A lonely Qilin who lives in a cottage in Cirruwa Woods that belonged to her previous Conjurer. She can alchemize DNA for Mott and also sells food to boost their stats.

Wake Forneus
A Toxin Kraken from the Den who's pursuing Rex along a mysterious fugitive, as leader of the Terror Trio.
Skip Carbia
An Ice-affinity Siren from the Den, who's a member of the Terror Trio.
Yorshk Voso
The leader behind the Terror Trio and the Red-Eyed Mog clusters, the Toxin affinity Kunekune is the Den General, second in authority only to Queen Verinne. For now.
Queen Han Verrine
The tyrannical Dragon in charge of the Den.
Peppy Jack
The strongest Tiny Oni, who developed bad vibes after a tragic incident and was sealed away in a cave on Tiny Oni Island. 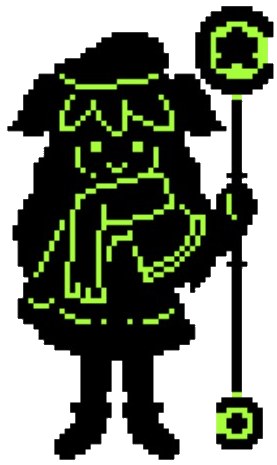 Klein: "An extremely talented Conjurer that made every Mogwai in the Den whisper in awe."
Eve Stacatto's great-grandmother, and the last Ambassador between Humans and Mogwai, until something terrible happened that changed her life.
King Long Verrine
The handsome and charming King Long, a Dragon mog who died some time in the past, father to both Rex and Kon.
Caesar Kimaris
The former general under Queen Han and King Long, and (one of) the fathers of Rex's egg.
Quinn Zaleos
A Conjurer (...?) Eve finds in a pocket dimension near Sunwich who has her picnic raided.
Frey Marchosias
A Shadow-affinity Werewolf who mistakes Eve for a thief in a pocket dimension near Otecho. She's trying to retrieve the snacks from Quinn's picnic.
Gwen West 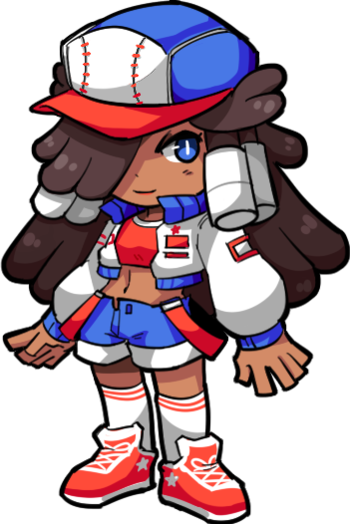 "Summer swings and the batter flies."

Gwen West is a Wuji "Witch" from Neo Awlins, a foreign country Eve can access temporarily via Beholder magic. Throughout the game, Gwen and two of her Mogwai are searching for a lost companion.

"Hashtag: This fish is raw! It's perfect for sashimi...!"

Dawn Norteno is a foreigner traveling the Outset that Eve first meets at Route 182. Two Mogwai have been looking for her, but Dawn claims not to be a Conjurer.

Vice Focalor and Silk Vepar
Two Mogs who are looking for their lost Conjurer, and each other.