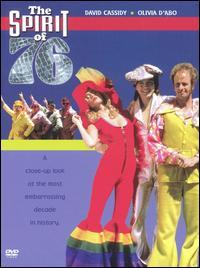 The Spirit of '76 is a 1990 American comedy film directed by Lucas Reiner.
Advertisement:

In the year 2176, a magnetic storm has degaussed all recorded history. Three time travelers, Adam-11 (David Cassidy), Chanel-6 (Olivia d'Abo), and Heinz-57 (Geoff Doyle), are sent to the founding of America to retrieve a copy of the Constitution so society can rebuild. Thanks to a glitch, they end up two centuries too late. With the help of teenage slackers Chris Johnson and Tommy Sears (Jeff and Steve McDonald of Redd Kross), the three set out to repair their machine and find a copy of the Constitution. Hindering their progress are science geek Rodney Snodgrass (Liam O'Brien), who wants to use them as his science fair project; Rodney's older brother Eddie Trojan (Leif Garrett), who wants to seduce Chanel-6; and two CIA agents who are on their tail.

The film claims to be the first ever '70s retro movie.

The Spirit of '76 features examples of: