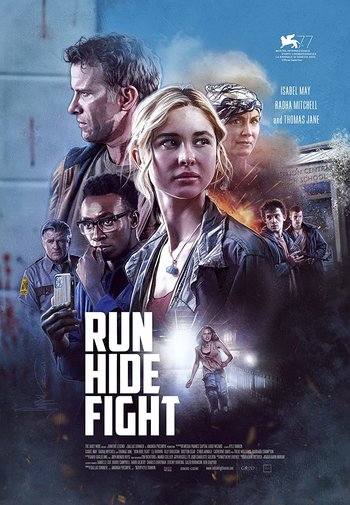 In an active shooter situation, you have three options.
Advertisement:

Run Hide Fight is a 2020 action thriller written and directed by Kyle Rankin and starring Isabel May, Thomas Jane, Radha Mitchell, Treat Williams, and Barbara Crampton, whose plot can essentially be pitched as "Die Hard in a high school shooting".

Zoe Hull is a 17-year-old high school student raised by her ex-military outdoorsman father Todd, her mother Jennifer having recently passed away from cancer. On a seemingly ordinary day at Vernon Central High School, her life and those of everybody around her are turned upside down when a van crashes into the cafeteria and four of her classmates — the charismatic sociopath leader Tristan, the long-suffering bullying victim Kip, the mentally unstable Chris, and the moody goth girl Anna — start murdering people before taking the entire school hostage. Zoe, who was in the bathroom when the shooting started, has a chance to escape, but instead, driven by instinct, she runs right back in to take the fight to the killers and save the school.

Originally produced by Cinestate, it was picked up by Ben Shapiro's news website The Daily Wire for distribution after Cinestate collapsed in a sexual assault scandal, making it their first foray into film. It premiered at the Venice Film Festival in September 2020, and on The Daily Wire's website on January 14, 2021.