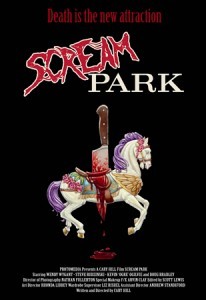 Death is the New Attraction
Advertisement:

Scream Park is a 2013 horror film by American director Cary Hill. Filmed at Conneaut Lake Park and the University of Pittsburgh, it features the staff at the closing Fright Lake amusement park as they throw one final party on the night that the park is closed forever. Unfortunately for them, someone has decided that a little bit of tragedy is just the thing to attract enough customers to be able to reopen the park. Stalked by murderous masked men, the workers need to find a way to escape.

A low-budget film partially funded through Kickstarter and Indiegogo campaigns, it garnered low reviews, but has enjoyed a certain amount of popularity for its retro stylings. A sequel, Return to Scream Park, was planned for 2016 and was stated to feature the surviving protagonists trying to figure out who really is behind the murders. The film is still listed as being in production on IMDB, but the associated Facebook group has been taken down.