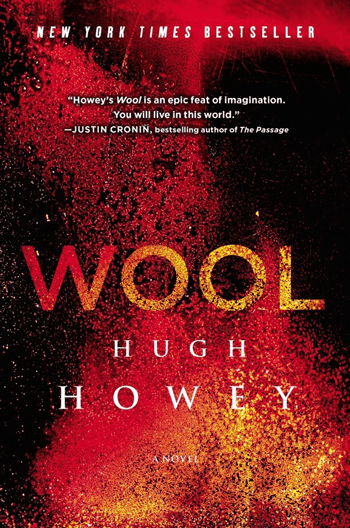 Welcome to the Silo. Beware the Cleaning.
Wool is a series of self-published post-apocalyptic novellas written by Hugh Howey. Originally a single short story, the surprisingly large popular reaction led to its continuation.

Something has happened to the world. What, exactly, has been lost to the mists of time and the ravages of rebellion, but all one has to do is look at the screens, where images from the cameras outside are projected, and see the brown, dead landscape covered by endless black clouds to know that going outside would be suicide. Instead, everyone lives in the silo. A massive, 146-floor building dug into the earth. For countless generations everyone has lived here, being born, growing up reading some of the rare children's books that survived the last uprising, applying for permission to take a lover, winning the lottery to have a child, and then dying, having one's remains turned into fertilizer for the essential crops.

In many ways the Silo is like a normal city: It has mechanics, a sheriff and deputies, a mayor, farmers, clerks, and even IT staff. The only thing it doesn't truly have is freedom. There are taboo topics, and so much as mentioning them is grounds to be sent to "cleaning", the fatal job of removing the grime and soot that coat the lenses of the external cameras, the silo's only link to the outside world.

But some people don't care about taboos, they want the truth, and their actions end up setting in motion events that could well destroy the entire city...