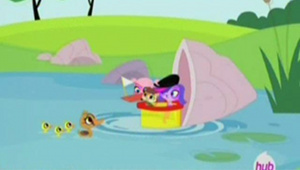 "We like to think of it more as a redistribution of wealth."
Written by Guy Toubes

The episode opens with a special news report from Sally Hairspray, who explains that the Largest Ever Pet Shop has been robbed. When asked for more details, Fisher Biskit instead keeps insisting that the Largest Ever Pet Shop is the only pet shop in Downtown City and doesn't divulge any specific information, but offers a reward for anyone who can figure out the thief's identity.

In frustration, Mrs. Twombly turns off the TV in the Littlest Pet Shop she had been watching the news report from due to Fisher's insistence of his lack of competition. Discussing the theft with Blythe, Blythe wonders why anyone would steal specifically from a pet shop, while Mrs. Twombly, fearful that Littlest Pet Shop may be next, decides to practice her kung-fu quilting to better defend the store. As she leaves, Blythe attempts to head back to her room to do her homework, but she instead finds a large pile of stolen merchandise from the Largest Ever Pet Shop in the dumbwaiter. Penny Ling initially suggests returning the stolen items herself, but Zoe points out that doing so will make Blythe look like the thief.

At the Largest Ever Pet Shop, Fisher shows his daughters that business has improved dramatically since the news story about the heist. However, when Monban detects more items have been stolen, Fisher gets set on edge, fearing that if it continues, the Largest Ever Pet Shop will run out of things to sell. Monban also detects the stolen goods turning up in the store, and Brittany and Whittany run down to the source. They see Blythe entering the store with bags of the merchandise and immediately accuse Blythe as the thief. Before they can do anything further to Blythe, she leaves the store, telling the Biskit Twins that she'll figure out the culprit herself. The Biskit Twins, refusing to be one-upped by Blythe again, decide to play detectives too, basing their personas off the main characters of SCI: Super Cute Investigators, a TV show they watch.

In the day camp, Blythe finds a set of footprints that don't match any of the regulars, which leads underneath the armchair. Blythe pushes the armchair aside and sees a hole in the wall with the entrance to a habitrail tube. Figuring this is most likely how the stolen items wound up in the Littlest Pet Shop, Blythe tasks Vinnie and Pepper to go into the tube to see where it leads. They run down the tube, but as they lose contact with the other pets, they discover an enormous labyrinth of tunnels in Downtown City's sewer system.

Back at the Littlest Pet Shop, Blythe makes a list of items she discovered in the pile and goes over it with Zoe to try to find any answers. Before she can make any progress, the Biskit Twins storm through the doors and attempt to coax information out of Blythe using techniques learned from watching SCI, but they have no effect. Eventually, Blythe distracts the Biskit Twins with a pretend TV remote so she can escape from the them, sending the twins back to the proverbial drawing board.

Wandering through the maze of tunnels, Pepper and Vinnie get lost. Pepper asks if Vinnie can retrace his steps, and in the process, he falls through a trap door but finds the entrance to the Largest Ever Pet Shop inside a rodent cage. They don't wait long, however, until a pair of hamsters join Pepper and Vinnie in the cage. At first angry at Pepper and Vinnie for trespassing, they calm down once Pepper tells them they found a tunnel and wanted to see where it leads. They introduce themselves as Dodger and Twist and that they operate a help service around Downtown City, taking things from Largest Ever Pet Shop and giving them to animals whom they feel need those things. Vinnie takes that thought to heart and goes into a fantasy session where he envisions himself as Vinnie Hood leading his Band of Merry Pets to rob the Biskits of Snottingham, though Pepper snaps him out of it before he gets out of hand. Steering the discussion back on topic, Pepper finds out from the hamsters that they've been stashing the items in the Littlest Pet Shops dumbwaiter for some time, where they keep the ones whose recipients they don't yet know. However, Twist tells Pepper that the stash seems to have vanished, so Pepper lets them know Blythe returned them to the Largest Ever Pet Shop. Twist decides they need to "borrow" more things to compensate, but his statement makes Pepper nervous, as she understands they're stealing.

To prove that the hamsters have good intentions, however, Dodger leads Pepper and Vinnie into the tube network to show them what he and Twist do day-to-day. Along with Twist, the four of them deliver rubber balls to bored alley cats, a hamster wheel to an overweight guinea pig, and a toy boat to occupy a trio of noisy ducklings. They return to the cage in the Largest Ever Pet Shop, but Pepper is still not convinced, futilely trying to explain to the hamsters that even if they're trying to do good, they are still stealing. Twist argues that the Largest Ever Pet Shop has far more merchandise than they'll ever use, and Dodger and Twist leap out of the cage. Attempting to stop them, Pepper follows them out along with Vinnie. After turning a corner, however, Monban notices Pepper and Vinnie and apprehends them. Realizing their actions got Pepper and Vinnie in trouble, they double over to the Littlest Pet Shop to let their friends know what happened at the Largest Ever Pet Shop. Hearing the story, Blythe immediately heads over there to free them.

Now that the hamsters feel remorse, Russell proposes they take back all of the items they've taken and return them to the Largest Ever Pet Shop, which would simultaneously atone for the stealing and prove that Littlest Pet Shop had nothing to do with it. To that end, with cooperation from the remaining day camp pets, they receive the toy boat back from the ducklings, the balls back from the cats, and the hamster wheel back from the now-fit-as-a-fiddle guinea pig.

Meanwhile, Blythe tries to explain to the Biskit Twins and Monban that the goods were going through a network of tubes that wound up in the Littlest Pet Shop. The twins, however, are not convinced and continue to blame Blythe. Sally and Fisher zip over where Fisher immediately points fingers at Blythe. When asked to explain why Blythe is innocent, she finds herself unable to provide an explanation that wouldn't give away her animal-hearing abilities. As pressure mounts on Blythe from every other human in the room, all of the stolen merchandise comes falling from a hole in the ceiling from a removed tile. Fisher examines the pile and finds out that they are all discard items, old merchandise to be thrown away. Blythe, hearing about this, persuades Fisher, on camera, to donate the discard items to needy pets and pledges that Littlest Pet Shop will do the same.

Blythe and Mrs. Twombly cooperate in loading a box of merchandise to part with, though Mrs. Twombly wonders how the pile wound up at Littlest Pet Shop. Unable to come up with a good explanation, Blythe distracts Mrs. Twombly to go back to the day camp room, where she finds Dodger and Twist. They tell Blythe that they'll look for things from the trash instead of from the Largest Ever Pet Shop and provide Blythe with a list of animals they've encountered who may need certain things before heading back down the pipe.

At the Largest Ever Pet Shop, the Biskit Twins ask Fisher to give them the reward. Fisher, initially hesitant because they never discovered the thief's identity, offers his daughters the reward anyway for having helped bring the stolen merchandise back: An extra-large bag of dog food.