Film / Midnight in the Garden of Good and Evil 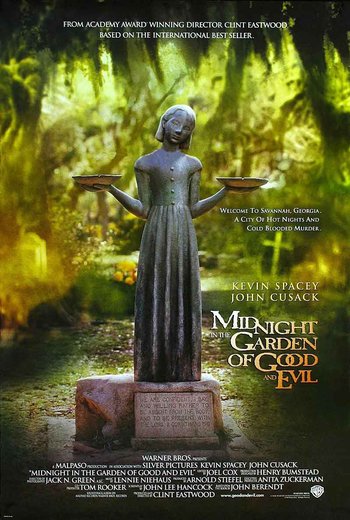 Savannah, Georgia, is an interesting city and the citizens are the most interesting part. A reporter who had been hired to cover a socialite's Christmas party decided to remain there instead of heading home to New York City and began to write a book based in the city. That reporter was John Berendt, and his book, Midnight in the Garden of Good and Evil, was adapted into a 1997 film, directed by Clint Eastwood and starring John Cusack, Kevin Spacey, Lady Chablis, and Jude Law.

The story takes place in The '80s. The Christmas party, hosted by Jim Williams (Spacey), is a gathering of the local who's who of Savannah. Williams has a glorious Southern-style mansion filled with antiques from the world over. However, after the party is over, Williams kills one of his employees and alleged lover, and is arrested and brought to trial. Some citizens related to him are then investigated by the journalist John Kelso (Cusack), a guest at Williams' party, in order to help in his defense.