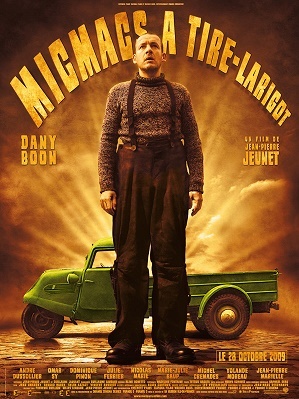 Micmacs à tire-larigot (or simply "Micmacs" in English) is a 2009 French film by famed director Jean-Pierre Jeunet, director of The City of Lost Children, Amélie, and A Very Long Engagement.

The film is about Bazil, a poor man whose father is killed by a landmine when he was a kid, and who gets a bullet in his brain during a shootout that happens outside the video store he's working in. The bullet isn't far enough in to kill him, but can't be removed without turning him into a vegetable, so he's released from the hospital with it still in his head, with the threat that it might kill him at any minute. Now homeless, he falls in with a band of scavengers who repair and re-sell junk to make a living. However, one day Bazil spots the logos of the two arms companies that made the mine that killed his father and the bullet that got stuck in his head. And then Bazil, helped out by his new friends, begins to plot revenge...