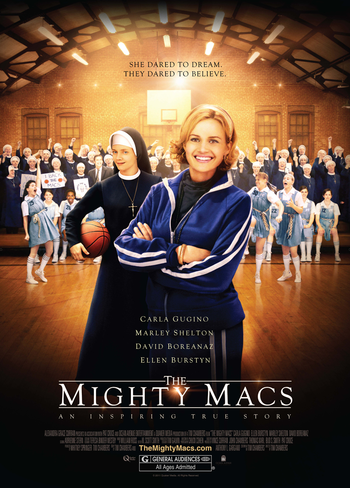 The Mighty Macs is a 2009note It was filmed in 2007, premiered in 2009 and went into wide release in 2011 Sports Story Drama, written and directed by Tim Chambers, Based on a True Story (though with a few liberties taken).

At the start of The '70s, Immaculata College, a small all-female Catholic school outside Philadelphia, is looking for a new basketball coach. The only applicant for the job is Cathy Rush (Carla Gugino), who's only barely out of college herself. Looking for a way to earn some extra money and pass the time while her husband Ed Rush (David Boreanaz) is off working as an NBA referee, Rush accepts the job but finds the Immaculata basketball program in a state of disrepair. The school gym has burned down, the athletic budget is nonexistent, and the stern nun in charge, Mother St. John (Ellen Burstyn), is busy trying to keep the school from closing down because of its lack of money. But Rush cobbles together a team, and with a shy young nun named Sister Sunday (Marley Shelton) as her assistant coach, the Macs carve out some success on the court. They get invited to the national tournament, but with the school in financial trouble, it might take a miracle to get them there.

Described as Hoosiers meets Sister Act, the film is still a fairly accurate account of the rise of Immaculata, which became a dominant force in early women's college basketball, winning three national championships under Rush. She was inducted into the Women's Basketball Hall of Fame in 2000 and the Naismith Memorial Basketball Hall of Fame in 2008, and the championship teams were inducted as a unit into the Naismith Hall in 2019.note Of the two halls of fame, only the Naismith Hall inducts teams.