Voices in One Room 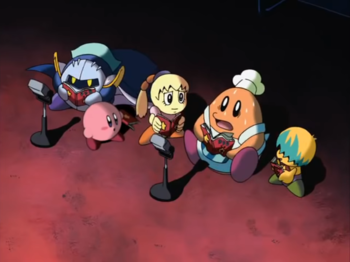 An animated representation of what goes on when this trope's in play.
A method of recording voices where all (or most) of the actors are in the same room and record their dialogue together.
Advertisement:

In anime, this is the standard. The animation is typically completed before the voice work is done, with all the actors in the studio at once. This cuts down on production time, and also has the benefit of allowing actors to play off each other's performances as well as see how the actual character looks while the dialogue is spoken.

Western animation likewise has this as the preferred style, but whether this can actually be regularly accomplished varies from project to project. In Western productions, the animation work is traditionally done after all the voice work (this technique is known as "pre-lay"), and the animators' job is to match the actor's performance. This can lead to higher animation quality and even the fun of improvised dialogue sneaking into the final product, but the attention to detail required to make sure all the lip movements match properly is part of why the average production period of these cartoons is up to five times longer than their Japanese counterparts.note Nine to eleven months per episode as opposed to two or fewer. With voice acting coming into play much earlier in the production cycle, there is less flexibility for when recording can take place. Add in that the voiceover industry in North America is a combination of professional full-time VAs and other types of actors doing voice acting on the side, with the cast for one show/film potentially being scattered across the continent (or even overseas), and you'll find that performers cannot always be gathered together for single group recording sessions because of scheduling conflicts.

Voices In One Room notably does NOT occur with dubs of foreign material, except in rare circumstances. This is because Automated Dialogue Replacement (ADR or "post-sync"), the standard dubbing method, is technically very complicated; having multiple actors in a room for ADR would make the process take far longer than just recording one actor at a time.note Although it was the norm in Brazil until at least the mid to late 90s, given the lack of recording tracks to work with made dubbing with everyone at once the best solution, even if there was a chance of someone mucking it up. Many actors still long for the creativity and camaraderie that ensued before they were forced to record separately. Plus, given the insanely-low profit margin for dubbed material, it is necessary to do the work as quickly as possible. The lack of this trope, however, is one of the main complaints of those who find ADR to sound "wooden" or "unrealistic".

open/close all folders
Anime
Film
Animated films in America are often NOT recorded with all voices in the same room due to Hollywood's increasing tendency of relying on popular film stars to fill major voice roles. Due to these actors' schedules, they usually record separately from the minor actors (usually full-time VAs who often DO record together). But even then there can be aversions, as listed below.
Live Action Television
Radio and Audio Drama
Video Games
Web Original
Western Animation
Feedback