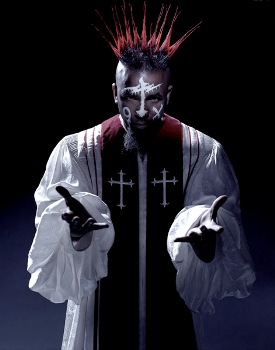 Anghellic.
"That's the Kansas City King, I love him!"
Advertisement:

Aaron Dontez Yates (born November 8, 1971), aka Tech N9ne, is a face-painted rapper from Kansas City, Missouri, named because of his rapping style: not only is he one of the fastest rappers in the game, he is also one of the most skilled. It helps that he began rapping at an early age - in order to remember how to spell his real name, Aaron Dontez Yates. His rapping skills have made him one of the most successful underground hip hop artists in history, and his business skills and ability for signing talented and viable artists made the label he founded, Strange Music, a powerhouse in independent hip hop.

Much of his early worked is marked by a lenience toward the darker side of hip hop themes, which Juggalos found really appealing, and earned him some dedicated fans among this subculture. Tech N9ne is generally lauded for his insightful lyrics and skillful delivery of unique subject matter with intelligence and humor.

He has also appeared in the film Alleluia! The Devil's Carnival.