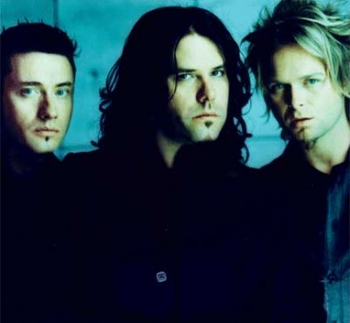 The Tea Party is a Canadian Alternative Rock band active between 1990-2005, known for their distinctive fusion of rock music and numerous other influences, especially Indian and Middle Eastern, which earned them the humorous categorisation "Moroccan roll". In 2011, the band reunited for a successful cross-Canada tour; shortly afterwards they announced their reunion was permanent.

The band's members are:

All of The Tea Party's albums were produced by vocalist/guitarist Jeff Martin, as a means of giving the band complete artistic control. The band's members were also known for being multi-instrumentalists, bringing up to 37 instruments each on tours.

The Tea Party's music was largely based around a fusion of Blues and Progressive Rock with Indian and Middle Eastern music, something which earned them quite a Hatedom that dismissed them as Led Zeppelin-meets-The Doors imitators. However, they became very popular in their native Canada, Europe and Australia. Later in their career, they also added electronics and an Industrial Metal influence to their basic "Moroccan roll" sound starting with the album Transmission.

The band suddenly broke up in 2005 due to Creative Differences. Martin has gone on to a solo career at first and then formed a new band called The Armada, while Burrows is currently a member of Crash Karma. Stuart Chatwood has arguably received a Breakup Breakout, having earned critical acclaim and a steady job doing the soundtracks for the Prince of Persia games.

In 2011, the band reunited for a successful cross-country tour of Canada. Shortly afterwards, they announced the reunion was permanent, embarking on a second cross-Canada tour, talking about recording a new album, and making plans to tour Europe and Australia. In September 2014, their eigth studio album, The Ocean at the End, was released.

Their name has nothing to do with the thing that launched the American revolution, the right-wing populist movement, or y'know, actual parties that involve tea, but instead comes from the nickname for the hash sessions of Beatnik writers Allen Ginsberg, Jack Kerouac and William S. Burroughs.