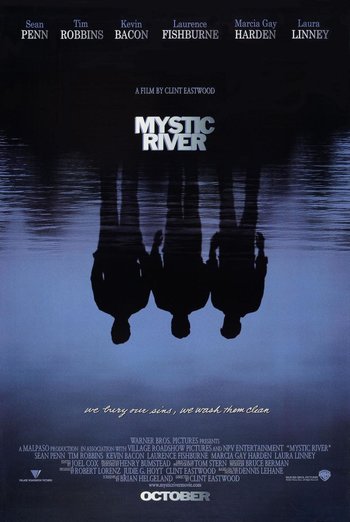 "We bury our sins here, Dave. We wash them clean."
—Jimmy Markum
Advertisement:

A 2001 novel by Dennis Lehane, Mystic River was brought to the screen in 2003 by director Clint Eastwood. The film version starred Sean Penn and Tim Robbins, who both won Oscars for their roles, and Kevin Bacon and Laurence Fishburne.

Years ago, Dave Boyle escaped with his life from mysterious men in Boston. In present day Boston, he is reunited with his childhood friends, Jimmy Markum and Sean Devine when the former's eldest daughter is found dead in a ditch. Sean, now a detective, and Jimmy, an ex-convict, both vow to find the killer themselves. Unfortunately, Dave, who came home to his wife all bloody the night of the murder, is their prime suspect...