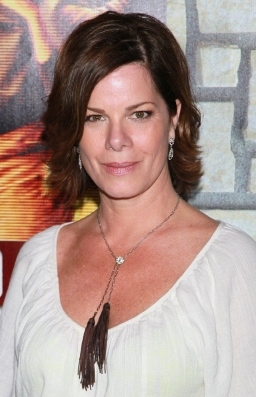 "So far, the thing I seem to have been rewarded for in film is leaving myself behind and transforming myself into other people."
Advertisement:

Her breakthrough role was in the 1990 film Miller's Crossing; this was followed by several roles which increased her profile, including The First Wives Club, Flubber, and Meet Joe Black. She received an Academy Award for Best Supporting Actress for her role as Lee Krasner in Pollock in 2000, and was nominated again for Mystic River in 2003. She has also starred in a string of successful mainstream and independent movies, such as Space Cowboys, Into the Wild, and The Mist, the latter of which won her the Saturn Award for Best Supporting Actress.

On television, her most prominent role to date was as FBI Special Agent Dana Lewis on Law & Order: Special Victims Unit in a series of appearances beginning in the 2005 episode "Raw"; she returned to the role three more times, the last in 2013. Other roles on the small screen include Claire Maddox on Damages, Diane Buckley in Trophy Wife, and Rebecca Halliday on The Newsroom, as well as guest appearances on Chicago Hope, Body of Proof and Royal Pains. Somewhere in all of the above, she also netted two Emmy nominations.

On stage, she won a Tony Award for God of Carnage in 2009, but was first nominated for originating the role of Harper Pitt in the landmark 1993 Broadway debut of Angels in America.

As of 2015, she stars as Dr. Leanne Rorish on Code Black, in the first primetime leading role of her career.

Tropes relating to the actress and her work: