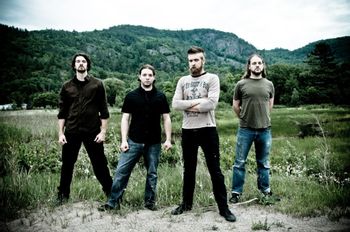 "There is no destination. There is only the journey." - David Gold

Woods of Ypres were a metal band from Ontario, Canada. Beginning in 2002 as a Melodic Black Metal band, starting with their second release they began to incorporate elements of Doom Metal into their sound. They released five albums, one compilation album, and two vinyl-only singles, generally on frontman and band leader David Gold's independent labels Krankenhaus Records and Practical Art Records (though their last album was solely released through Earache Records, and their four prior albums were rereleased through Earache afterwards.)

The band had notoriously unstable line-ups, with band leader David Gold the only constant member. After a recording session in August 2010, the band seemingly broke up, but this was soon revealed to be a ruse as Gold revealed that they had in fact signed to UK metal label Earache Records, who began reissuing the band's back catalogue the following year. However, tragedy struck when in December 2011, shortly after finishing recording for their fifth album, David Gold was killed at the age of 31 in a car accident. The rest of the band at the time decided against continuing without Gold and laid Woods of Ypres to rest permanently not long after. Earache Records posthumously released their final album Woods 5 in 2012, which, alongside widespread critical acclaim, won the band a Juno Award in 2013 for Heavy Metal Album of the Year.

Woods of Ypres and their music contain the following tropes: