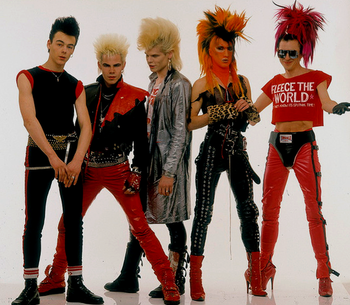 Sigue Sigue Sputnik is a British Cyberpunk New Wave Music band whose main run was from 1986 to 1988.

Once the punk band Generation X broke up, Tony James saw that the ex-singer, Billy Idol, was seeing substantial success. In 1984 he recruited the musical novices Martin Degville (vocals), Neal X (guitar), Chris Cavanagh (electric drums, drums), Ray Mayhew (drums, electronic drums), and Yana Ya-Ya (AKA Jane Farrimond, did keyboards and special effects). He only did so because of their looks. With that, James (played space guitar) didn't fully intend on the band being musical, instead being saturated with the vision of a cyberpunk dystopian future, with flavors of postmodernism, sci-fi pop culture, technology, and commercialism. Tony James himself called the band "Hi-tech sex, designer violence, and the fifth generation of rock 'n' roll". And thus, Sigue Sigue Sputnik was born.

They signed on with EMI and released their first single, "Love Missile F1-11" in 1986, and it hit No. 3 on British charts. Two other songs reached the British Top 40 hit singles: "Twenty First Century Boy", and later "Success".

The band name means "burn, burn satellite" in Russian and to reference the Soviet Union-built artificial satellite. Their sound is categorized by heavy usage of synths, special effects, and movie samples from James' favorite films. Their looks also garnered attention as they wore large colorful wigs, loads of fishnets, and "glam punk" style clothing, provided by Degville himself. It's unclear if they just wanted fame, attention, or if it's the point they wanted to make. With the kind of beginning they had, it can be inferred it was a bit of both.

They made two studio albums in the original run: Flaunt It and Dress For Excess. To promote their first album, they made many interviews and TV appearances, even as selling empty space in between tracks for adverts. Their second album, Dress For Excess released in 1988, being advertised as "This time, it's music". The band broke up soon afterwards.

Some songs found radio play and popularity in other countries like Japan and Brazil.