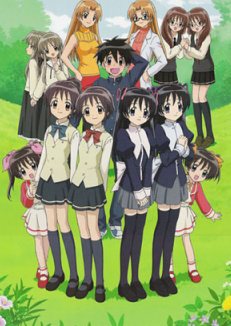 If he screws this up, there will be a ton of birds flying around.
Advertisement:

Futakoi is a 2004 anime and visual novel series created by Mutsumi Sasaki. It tells the story of a boy named Nozomu Futami who goes back to his home town, moving in near a shrine. This shrine contains a stone, which, according to legend, turned two twin girls into birds. They chose to turn into birds because they were both in love with a man who would not pick one or the other. Soon Nozumu inherits the same problem, winding up with his own 12-girl, 6-sets-of-twins, harem.

In 2005, a 13 episode anime Spin-Off, and later a manga, titled Futakoi Alternative was made. While this series contains the same characters as the original, it has a different story line and continuity altogether.