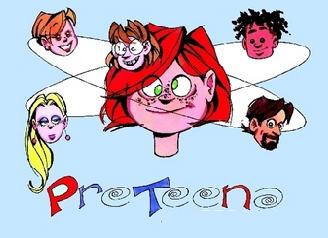 Allison Barrows' Slice of Life account of the Keene family of New England. Hugh and Tess Keene are freelance artists with two daughters. The family dynamic is most often viewed through the eyes of eleven year old Teena (the PreTeena

of the title), although the other principal characters are allowed their points of view. A newspaper comic strip about parenting, growing up, and family dynamics.

This comic strip was first syndicated on newspapers starting from April 23, 2001, and ended its run at May 18, 2008, ending with a little over seven years of material, including reruns. The artist's reasoning for ending the run at that time was to attend to the needs of her son and daughter, who were at that time entering high school and college respectively.

The archive of this comic strip can be found here