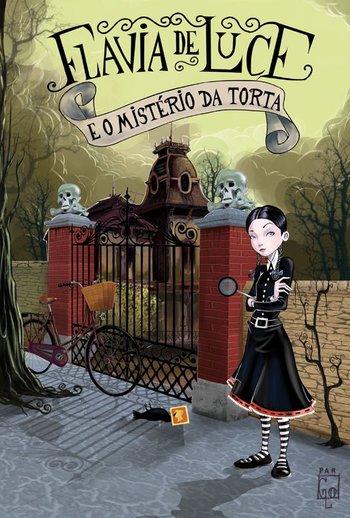 The Flavia de Luce books are mystery novels written by Canadian author Alan Bradley. By now, ten novels of the series are published, as well as an additional short story.

Protagonist is the young Flavia de Luce, eleven-year-old chemistry genius and amateur detective, who lives in the early 1950s in the fictional town of Bishop's Lacey near London on her family's old and a bit decrepit mansion Buckshaw. The de Luces are Old Money, just without the money, and with their mother being long dead and their father, war veteran Haviland de Luce, being emotionally distant and completely hands-off educational-wise, the three sisters de Luce — Ophelia, Daphne, and Flavia — are left to a lot of time to make each other's life hell and follow their own interests. Flavia's passions are chemistry, the extensive laboratory she inherited from her great-uncle, and happening to come across corpses. The police is not delighted to have a precocious girl investigating crime scenes with not too much respect for any laws but those of nature — even though, more often than not, Flavia is one step ahead of everyone else.

The additional short story The Curious Case of the Copper Corpse was published in 2014 and plays chronologically between the 6th and the 7th novel.