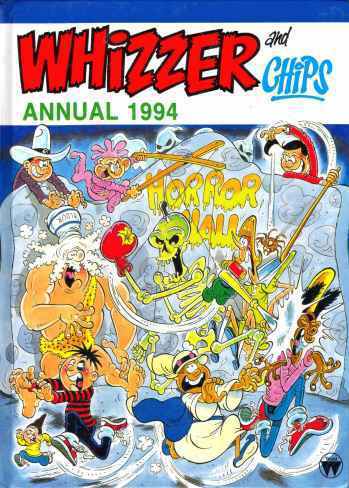 Whizzer and Chips was a British comic which first started in 1969. The comic ran until 1990 when it merged with a comic called Buster (a spin off of sorts of Andy Capp). It was similiar in style to The Beano and The Dandy and was a direct competitor to the two being published by a different publisher, Fleetway, as opposed to The Beano and The Dandy which were published by DC Thomson.
Advertisement:

The comic's gimmick was that it was two comics in one, one called Whizzer and the other called Chips which was a pull-out section. These comics were supposedly rivals with so called raids (which involved characters from one comic entering the other) between the two being a common occurrence, readers were encouraged to become Whizz-kids or Chip-ites (this referred to which comic they supported) and each comic had a different leader; Sid from a strip called Sid's Snake for Whizzer, and Shiner for Chips. The distinction between the two titles was later emphasised by changing the duotone strips in Chips from red to blue.

It incorporated many, many other comics in mergers over the years and finally merged with Buster, but in any case the distinctions were unclear at any point because Fleetway would publish compilations drawing on strips from all their comics put together and would reprint strips which debuted in other comics. Therefore, not all the strips mentioned below will necessarily have appeared under the original title.

Though they eventually died out in The '80s, formerly occasional adventure strips with an Art Shift to a more realistic style were included as well as the humour strip majority.