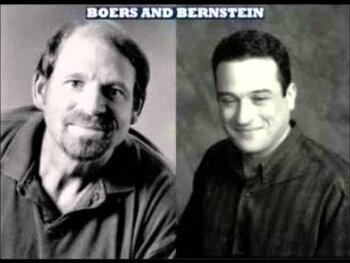 "They've done their best to keep the sports world on its toes."

Sports talk radio tends to be a bit predictable, if you stop and listen to it. You've got some really boneheadedly-stupid callers, with some really bizarre theories about sports.

Since keeping these callers / listeners happy means ratings, the host or hosts on the show immediately agrees with the caller, because that's really why the callers called in: to hear their voice on the radio, and for someone they listen to on the radio agree with them.

Boers And Bernstein, on the Chicago radio station The Score (WSCR 670AM), is not that kind of show. At all.

Hosted the titular Dan Bernstein and Terry Boers, the show's main draw is how the hosts interact with their callers, who rarely remember that these hosts won't simply agree with whatever they say. Depending on your bent, this is the draw of the show.

Boers and Bernstein contains examples of: