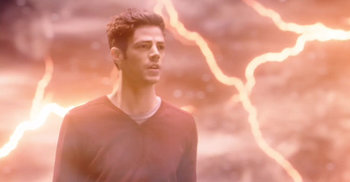 Welcome to the Speed Force
Following his apparent death, Barry wakes up to find himself somewhere seemingly familiar, but strange, to finally answer the burning question since the beginning: Why did the Lightning choose him? Meanwhile, the team works to bring him back with Cisco's Vibe powers, while dealing with he return of "The Man of Steel".