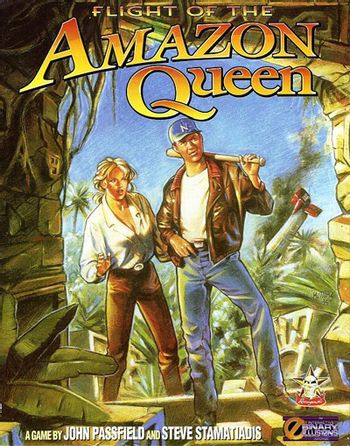 Flight of the Amazon Queen is a point and click Adventure Game released by Interactive Binary Illusions in 1995. It is strongly influenced by LucasArts adventure games such as The Secret of Monkey Island and Indiana Jones and the Fate of Atlantis and is available for free download through ScummVM's website

The game takes place in the late 1940s and concerns a major league baseball player turned pilot for hire named Joe King whose job to fly a plane carrying the spoiled movie star Faye Russel to Buenos Aires lands in disaster when the plane crashes in the Amazon jungle. While stranded in the jungle, King comes across both a village of Amazon warriors and a mad scientist masquerading as a lederhosen tycoon who kidnaps the Amazon princess with plans to turn her and the rest of the world's population into dinosaurs. Yes, it's that kind of game.