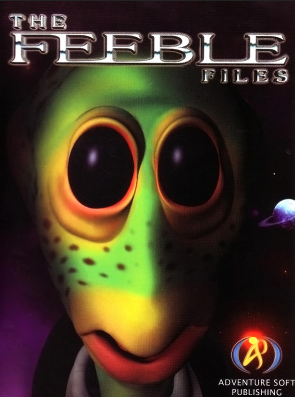 The Feeble Files is a 1997 cartoony adventure game from Adventure Soft, creators of Simon the Sorcerer. Its half-serious, half-comical plot serves as a rich source of references and shout-outs to Blake's 7, Star Wars, 1984 and many more.
Advertisement:

The player's character is Feeble, an alien whose job is to make Crop Circles on Earth. He is fanatically loyal to the Obviously Evil totalitarian system of Omni Corporation, led by the central entity OmniBrain. However, one day, Feeble commits a terrible mistake, which puts him on the way to learn the truth about his society. Alongside fellow rebel Dolores and robot SAM, he marches forward, liberating the galaxy.

The Feeble Files provides examples of the following tropes: