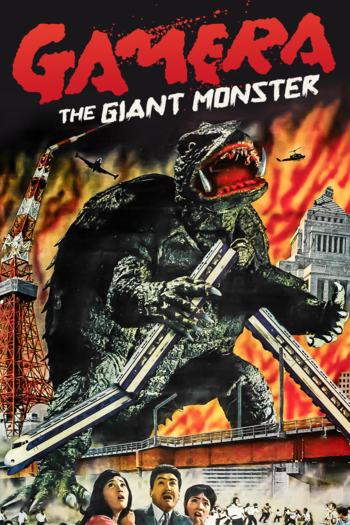 "Gamera is a good turtle!"
— Toshio, after Gamera has destroyed Tokyo and killed hundreds of thousands of innocent people.
Advertisement:

Giant Monster Gamera, also known as Gammera the Invincible during its North American release, is a 1965 film that marked the beginning of the Gamera franchise. It is directed by Noriaki Yuasa and written by Niisan Takahashi. The film originally started life as a story about giant rats, but when the rats that were going to be used ended up being unusable due to fleas and other reasons, the filmmakers retooled the script and changed the monster(s) into a giant turtle. The film was one of the last giant monster films to be shot in black-and-white.

There are two different English dubs of the film: the U.S. cut Gammera the Invincible, which included additional footage and also cut many sequences, and the later "Sandy Frank" or international dub, which follows the Japanese storyline closely, with only a few changes.

The film was released on November 27, 1965. Its story is followed by Gamera vs. Barugon.