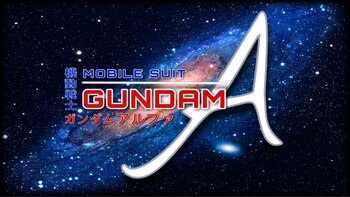 "In the distant future, mankind has expanded to the stars and populated much of the galaxy. But despite these advancements, man is not at peace, and soon after, the Galactic War emerges..."
— Story Description
Advertisement:

It is now three hundred plus years into the Galactic Century. Throughout this era, mankind — which, as it turns out, exists on other planets besides Earth — has expanded well into the galaxy through various means of colonization. From planetary settlements to space colonies, man has flourished throughout the GC era, while scientific and technological breakthroughs are continuously made.

And yet, as one can tell from the description, there is no peace in this time. Due to a variety of developments, the galaxy has since been divided into two camps: the Inner Powers, who hail from the inner and middle parts of the galaxy, and the Outer Powers, who are closer to the rim. Both sets of nations would become increasingly belligerent toward each other, but, namely through the efforts of the republican Earth Federation (on the Inners' side) and the eugenicist Zeon Empire (on the Outers'), a shooting war is otherwise avoided for the last two or three centuries or so. And then, on June 7, GC 364, it would all change.

Upon the latter date, the Emperor of Zeon, Zorin Tor Daikun, and his Chancellor, Degwin Zabi, would be assassinated by an Inner Power aligned (or so it is claimed) terrorist cell. In their place, Degwin's eldest, Gihren, ascends to the throne and, virtually overnight, remakes Zeon to his image through various means of terror (namely the purging of the House of Daikun and its supporters). Once firmly in control, Gihren leads Zeon and its allies toward conquest, kicking off the Galactic War in earnest. Naturally the Earth Federation and its own allies attempt to stem the tide, but are otherwise no match for the Zeon headed blitzkrieg. Two years of bitter fighting would soon follow, through which Zeon and the rest would gain substantial gains into the galaxy, while Earth and the other Inner and Middle Rim nations can do little more than hang on for the ride.

That is, until GC 379. Working in the background before and during the war, the Earth Federation had developed a secret weapons program, codenamed Project V. The purpose of this program is to develop the ultimate mobile suit, one that, at the most basic level, can overpower Zeon and the other Outers' technologically superior machines. After years of development and refinement, this new mobile suit, the Gundam, is at last ready for field testing, and so three prototypes are shuffled off to the distant space colony of Antillia. As is the lead test pilot, an innocuous young man by the name of Amuro Ray...

Mobile Suit Gundam Alpha is an ongoing Fanfiction series by Wing Zero Alpha of Code Geass Megiddo fame. It is available on Fanfiction.net

. As can be guessed from all of this, Alpha is a retelling (and huge expansion) of the original Mobile Suit Gundam story, only now with the setting revised to the galactic scale instead of just the Earthsphere. As with his earlier work, the story is told from multiple perspectives of both canon and Original Characters, with the former often expanded beyond their original forms. And, of course, the action remains incredibly detailed.

This series has a section

on the Gundam Fanon wiki

, which is open to editing.