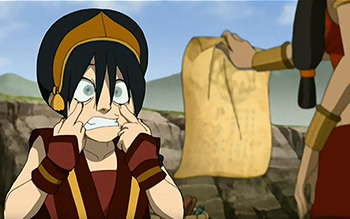 Many disabled people have lived with their handicaps for a very long time, and thus would usually develop a means of coping in a way where they appear "normal." Sometimes this applies naturally, like a blind person using all of their other senses to the point where they forget that they are blind. In most cases (and because it's cool), the trope usually applies to someone who uses superpowers to compensate, like getting around with levitation despite being paralyzed.

Because of this, running gags and moments of awkward silence are born from the times when the characters around them are suddenly reminded that one is disabled.

Compare with You Know I'm Black, Right?; contrast with Ignore the Disability.