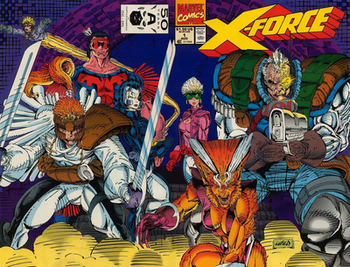 X-Force has been the name of several different Marvel Universe Super Hero teams and comics, with few common members and very little generally to link them except for being closely tied to the X-Men, with varying degrees of cooperation between the two at different times.

The original X-Force was created when creative control of the New Mutants series was given to artist Rob Liefeld, with Fabian Nicieza scripting the dialogue. Liefeld immediately set about making the series Darker and Edgier, adding several new badass main characters and dropping others, and having team leader Cable reform the team into an "ends justify the means" militant strike force, culminating with a series relaunch under the new X-Force title. The character lineup retained Cable, Cannonball and Boom-Boom, while adding Warpath (formerly of the rival superpowered team, the Hellions), Feral, Shatterstar and Domino. Siryn was also added to the team within the first five issues.

The series was at first extremely popular, with the #1 issue becoming the second-best-selling comic of all time. Liefeld however quickly became frustrated by working with characters he didn't own, and soon left Marvel to form Image Comics in 1992. Nicieza took over creative control upon Liefeld's departure and immediately began turning the series into a more natural continuation of New Mutants, including bringing back the characters Sunspot and Rictor. Cable was temporarily written out and X-Force struck out on their own as independent young adults, setting up their new base in the ruins of the Camp Verde reservation in Arizona and at last bonding as True Companions. Cable soon returned in the Fatal Attractions (Marvel Comics) crossover, but with a new and less authoritarian leadership style, and Feral left the team for good; Dani Moonstar, the former New Mutant, was also reintroduced as a recurring character. Nicieza continued to write up through the Age of Apocalypse storyline of 1995, after which he was replaced by Jeph Loeb.

Loeb moved the team back to the Xavier Mansion and had them cooperating much more closely with the X-Men and Charles Xavier, as part of a line-wide initiative to bring all the various X-books closer together. Cannonball was shifted to the X-Men and Caliban joined X-Force; Rictor was also written out, but returned the following year. Boom-Boom also changed her codename to Meltdown.

After Loeb's abrupt departure in 1997, John Francis Moore took over writing duties and once again began drawing on the characters' long histories as New Mutants and X-Force. Under Moore's long tenure, the team disbanded in the wake of the Operation: Zero Tolerance storyline. The cast was narrowed down to five – Meltdown, Warpath, Siryn, Sunspot and a returning Dani Moonstar – who set off on a roadtrip across America and ultimately established their new base in San Francisco. There, the team took on new member Bedlam and reunited with former members Cannonball and Domino. During this period, sales of the book fell from being one of Marvel's best sellers to being solidly mid-tier.

In 2000, Warren Ellis was brought in as part of the X-Men's line-wide "Revolution" revamp, and reformed X-Force as a covert strike team under the leadership of his character Pete Wisdom. This ultimately failed to attract new readers and the decline in readership continued, with Ellis's new creative direction only lasting for a year and ending at issue #115.

At the same time as writer Grant Morrison began their acclaimed run on New X-Men, Marvel's new editor-in-chief Joe Quesada also recruited writer Peter Milligan and artist Mike Allred to take over X-Force – and they agreed as long as they were free to do absolutely anything they wanted. The result was effectively a completely different series in everything but name from issue #116 onwards, with an entirely new cast of characters and new premise. The new X-Force was a government-backed team of publicity-hungry superheroes with a severe case of Anyone Can Die, who had blatantly stolen the name from the original team. Milligan's X-Force was an Acclaimed Flop: although it was praised for being a subversive satire of the excesses of celebrity culture and reality TV, the audience wasn't on board and sales plummeted. The series was cancelled at issue #129 and relaunched as X-Statix.

In 2004, Marvel brought Liefeld and Nicieza back for a six-issue X-Force miniseries (October, 2004-March, 2005), returning to the original characters, which posted decent sales despite a critical drubbing and Liefeld's using some of his previously unused art for other titles in the book. A four-issue X-Force: Shatterstar prequel miniseries (April-July, 2005) immediately followed.

X-Force has been relaunched a number of times since then with different teams, most of which have little to do with the original series. These relaunches have their own pages:

An X-Force team led by Deadpool makes its big screen debut in Deadpool 2.

The first series provides examples of: