The characters who appeared in GoLion.

The leader (known to his teammates as "Chief") of a small group of astronauts hailing from the planet Earth, when his crew returned from a long journey only to discover that their homeworld was ruined by a nuclear war, they were abducted by a slave ship from the evil planet Galra, which is found in the great dark nebula. However, Akira and his four comrades escaped from Daibazaal's prison facilities on Galra. After being ambushed by a swarm of Galran attack ships, Akira was forced to land on the planet Altea, it was there that he and his friends were chosen to resurrect the legendary mechanical space guardian, Go Lion. At first, there were only four keys to be found, and Akira had to Pilot the Green Lion... but when the fifth key was recovered, Akira gave his lion to Shorty, and took control of the great Black Lion.
Advertisement:
Takashi Shirogane

Akira's second-in-command, nicknamed "Quiet" because he rarely spoke. Takashi served his teammates as commander of the Blue Lion, that is until his untimely death at the hands of one of Galra's Beastmen.
Isamu Kurogane

The dumbass, cocky member of the party of escaped earthlings. For some reason, he earned the nickname "Moody". Apparently, he has plenty of enthusiasm to operate the Red Lion. While he may not be the best fighter in the group, battling Galra would be dull without him.
Tsuyoshi Seido

The fourth of the five explorers, his short temper has given him the nickname "Hothead". Tsuyoshi had plenty of guts to pilot the Yellow Lion, but his weakness might be his phobia of heights (he somehow displayed that when his party was escaping their cell). While he takes great pride in battling for Altea, his biggest regret was leaving his younger sister in their war-torn homeworld.
Hiroshi Suzuishi

The youngest of the five astronauts, Hiroshi, a.k.a. Shorty, has served as the quickest, and most elusive fighter of the bunch. As Sadak had sent a fleet of Galran war machines to recover the escaped prisoners, Shorty managed to scout the area, leaving the other four to command the lions. But when the missing key to the Black Lion was finally found, Akira gave the green lion to Shorty, and the five earth heroes were able to forge the creatures to become Golion.
Princess Fala

Heiress to the throne of Altea, and lone survivor of the royal family. Fifteen years ago, Daibazaal and his henchmen Honerva and Sadak, attacked Castle Altea, killing everyone in the palace save two, as the newborn Fala was taken into hiding by her father's general, Raible. And now on her sixteenth birthday, Fala had welcomed the five heroes from Earth with open arms. When Takashi was killed by Honerva, and her ferocious Beastman, it was Fala who later took the opportunity to operate the Blue Lion (even if it meant disobeying her elder's orders), thus becoming the team's new Chick, leaving Isamu, of the Red Lion to take over as Lancer.
Advertisement:
Raible

Once King Raimon's most trusted military strategists, now a broken old man and caretaker to the orphaned Princess Fala. Raible saw potential in the five Earth heroes when they first arrived at Castle Altea. He is a stubborn man, and wanted nothing more than the safety of the princess, even if it meant preventing her from piloting Golion. But later, he slowly began to realize how important she was in Golion's fight against evil.
The Altean Mice
A family of four rodents from the ruined castle. They were Platt, the father; Chuchule, the mother; and their two children. They befriended princess Fala when she was ten and would become the Golion team's trusted small allies. At first, they had stolen the Black lion's key from the king's tomb, but thanks to Fala, the mice returned it so that Golion would be reborn. They even helped the princess out of her bonds so that she could assemble the giant robot for the first time.
King Raimon

Princess Fala's late father, Raimon ruled the peaceful world of Altea, but on that fateful day, Daibazaal and his minions invaded the royal palace. What's worse, Sadak was ordered to behead King Raimon, his wife, and their children. However, the Galrans were unable to destroy the king's youngest child, Fala, as she was hidden from them by Raible. Fifteen years later, Raimon aids the Golion team as a ghost. And even though he's dead, he could see his daughter's potential in operating Golion from the beginning.
Hys

An old woman from Altea who took refuge in Castle Gradarm. a mecha fortress built underneath the ruined Castle Altea. Hys became the new head nursemaid for the princess, and, like Raible, was acting like a real pain. The four guys from Earth didn't like her either, you might want to call her nothing but a Battle Axe.
Prince Alor

The youngest of the royal children of Planet Heracles, his people were servants to the Galra Empire. He even hero-worshiped Prince Sincline, but things got worse when the Galrans killed the boy's older brother and father. In the process, Sincline captures the family's middle child, Princess Amue. Now Alor puts his trust in the Golion Team, in hopes of getting his sister back.
Advertisement:
Princess Amue
The middle child and only daughter of the king of Heracles. Amue could not understand why her older brother, Prince Samson, was chosen to become a Beastman, nor why her little brother Alor saw Sincline as a hero. Princess Amue was the only one in her people to see the evil in Sincline's heart, but Sincline himself saw that Amue resembles Princess Fala of Altea. In that bitter battle on Heracles, Sincline takes Amue captive. She had been prisoner to Galra until she met someone who happened to be Takashi's kid brother.
Ryo Shirogane

Takashi's younger brother, he had disappeared from the crew somehow before they could return to earth. He is later discovered dwelling in the caverns of Galra, where he met Princess Amue the two returned to Heracles thanks to the efforts of the Golion team. Ryo swore revenge against Galra for the death of his brother and soon teamed up with Amue to ambush Galra castle. 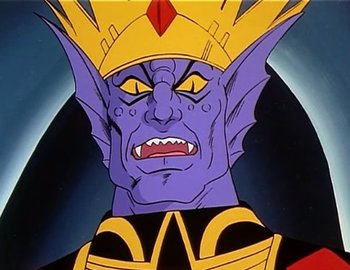 Long Live Emperor Daibazaal!
Sinister ruler of the Planet Galra, Daibazaal swears to conquer the great Dark Nebula. he had sent battalions of war machines, and space pirates to plunder the heavens, capturing slaves for his arena so that they were forced to battle the mighty Deathblack Beastmen. Apparently, the slaves would become food for the Galrans. Little did he count on was the five earth slaves who escaped from his clutches, and fled to Altea where they became pilots of the legendary Golion.
Old Witch Honerva and Jaga

Daibazaal's personal master of occult science, Honerva is responsible for creating giant Deathblack beastmen, and Mecha-beastmen, to destroy villages on Altea. She can also disguise her hideous form into something more human. Her pet cat, Jaga, is a feisty blue feline, with a yellow mohawk and a taste for blood. It seems to have a grudge against the Altean mice.
Commander Sadak

The Cybernetic leader of Daibazaal's many fighting forces. Sadak had been plundering the universe in search of slaves who would be forced to fight the Deathblack Beastmen. When Akira, Takashi, Isamu, Shorty, and Tsuyoshi had escaped to Altea, Sadak led a platoon of war machines to tear the planet apart. Of course, he got upset when Honerva revived him of the attack and sent a beastman in place of him to finish the job. But Sadak swore to destroy Golion, even if it meant becoming a beastman himself.
Crown Prince Sincline 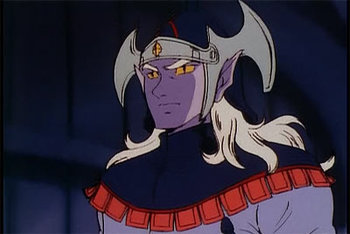 Wicked son of Emperor Daibazaal, Sincline returned to Galra after a long conquest of a nearby galaxy. He had pardoned the execution of Commander Sadak for his many failures and insisted that Sadak himself should go one-on-one with Golion. Now that Sadak is gone, Sincline becomes the new head of Galra's fighting forces. He developed a forbidden obsession for Princess Fala, probably because of her resemblance to his late mother. And when he couldn't have Fala, he takes Princess Amue hostage. While Sincline served his father, he secretly seeks to overthrow the emperor... thus becoming the new king of evil.