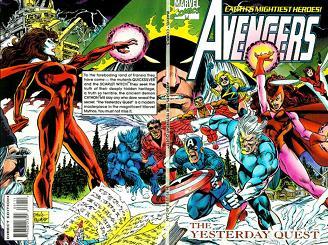 The Yesterday Quest is a storyline of the Avengers, with the long awaited origin of Quicksilver & the Scarlet Witch. The story was created by a team of writers including Marvel writer/editor Mark Gruenwald, and the art was pencilled by John Byrne.
Advertisement:

An old gypsy, Django Maximoff, uses his magic stone to steal the spirits of Quicksilver and the Scarlet Witch, and place them inside little wooden dolls. He claims that he is their father, and that their real names are "Ana" and "Mateo," although the mutant twins have long believed themselves to be the children of Golden Age heroes, the Whizzer and Miss America. The Avengers locate him and the Vision destroys the stone, restoring the twins' spirits to their normal bodies. To investigate Django's claims about their origin, the twins take a leave of absence from the Avengers and accompany the old man back to their native country of Transia.

On their first night, the sorcerer Modred shows up at Wanda's room and offers his help in her quest for her identity. He takes her to Wundagore Mountain, and prepares her as a host of the evil god Chthon. Quicksilver finds Bova, who tells him of their origin: they are the twin son & daughter of Magda, a woman that fled from her husband and sought refuge in Transia. She gave birth, and then escaped, fearing that her husband may find her and take her children. Bova tried to give them to the Whizzer (who was there with Miss America at the moment, and whose child died during birth), but he fled, distraught over the death of his child. The High Evolutionary gave them instead to a Gypsy family who lost their kids Ana and Mateo. Now Quicksilver knows everything... except the identity of his father.

Wanda is finally possessed by Chthon, and the Avengers show up. The Beast manages to steal the Darkhold and break the spell, and Quicksilver manages to use the wooden doll to trap Chthon's spirit and free Wanda. He then threw it into the abyss, and Wanda unleashes a mountain slide over it. The end.

The Yesterday Quest provides examples of: