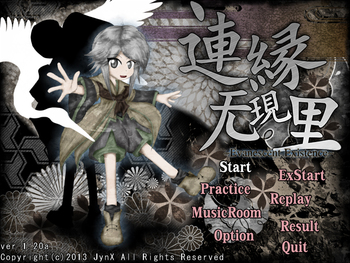 Humans call that land "Mugenri", but because it's a tabooed land, it's very unlikely for it to become known in the outside world. After all, even a shrine road with few gates is enough to make weak youkai falter. After all, even a contradictory barrier is enough for weak humans to be deceived.
Advertisement:

Len'en Project ("Len'en", 連縁, meaning Chain of Events or Connecting Chain) is a series of vertical danmaku shooting games made by JynX. Although it takes inspiration from Touhou Project (the setting) and Seihou (the bullet patterns), the games are not fan-games of Touhou Project because they are set in a separate world which has its own canonicity.

Tsurubami Senri, the priest and hero of Mugenri, spirits away some humans to be their replacement while they're out for some time. The Chosen One turns to be the Child Prodigy Tsubakura Enraku and their best friend Cloudcuckoolander Reality Warper Yabusame Houlen. Now the two have to resolve incidents and protect Mugenri....with varied results.

There are currently four games in the Len'en series, which include:

about the game series.
Advertisement: